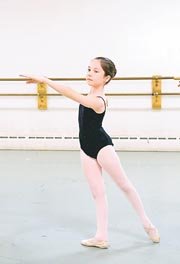 Fairfax Station resident Emily Eisert is performing in the Washington Ballet's production of The Nutcracker at the Warner Theater. 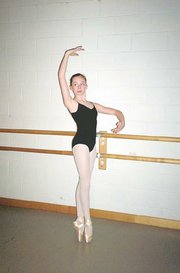 Burke resident Katie Monogue plays a butterfly in the Washington Ballet's production of The Nutcracker at the Warner Theater.

With pointed toes, colorful costumes and graceful steps, three Fairfax County girls are dancing their way through the holiday season as part of the Washington Ballet's annual production of "The Nutcracker."

"This is the fourth year we have put on Septime Webre's version of ‘The Nutcracker,’ which is set in a Georgetown mansion and features a lot of Washington elements," said Laura DiSerio, manager of marketing and communications with the Washington Ballet.

While the music is the same as traditional versions of Tchiakovsky's beloved tale of magic and Christmas joy, some of the characters and settings have been changed to fit the region. Instead of waltzing through life-sized flowers, the dancers are surrounded by cherry blossoms, DiSerio explained.

Dancing alongside professional ballerinas is just one of the thrills for the students involved in the production, including Katie Monogue, 12, of Burke; Emily Eisert, 11, of Fairfax Station and Shira Freeman Klinger, 14, of Fairfax.

"I've been dancing since I was 3," said Katie, who has performed in two other versions of "The Nutcracker."

A student of ballet, jazz, modern and hip-hop dancing, Katie appears in the girlfriend scene in the first act of the performance and as a butterfly in the second act.

"The military girlfriend is one of Clara's friends, and in that one I have to dance on toe," Katie said, referring to the difficult method of dancing in pink pointe shoes. "The butterfly is one of the people the Sugar Plum fairy can control."

Both characters are "equally difficult" to perform, but Katie said she enjoys the chance to perform at the Warner Theater, a well-known establishment in Washington, D.C.

"I love performing on stage and making people happy," she said.

To make her happy, Katie’s grandparents flew in from Oregon to surprise her on opening night, on Friday, Dec. 7.

"It's a little intimidating to be on the stage at the Warner Theater, but it's really exciting too," Katie said.

Lake Braddock student Emily Eisert is in her first year with the Washington Ballet, but has been studying dance for five years.

In this production, Emily plays a clown in the first act, riding the carousel in Clara's party.

"The costumes are really bright and colorful," she said. "We all have white face paint with red designs all over it."

Emily said she was "a little nervous" trying out for the play and on opening night, but those nerves are soon replaced by the joy of being on stage.

"It's such an honor to be in this," she said. "I've never performed somewhere that big and professional. I like seeing all the other dancers up close and seeing what they can do."

Emily hopes to start learning how to dance en pointe in January, when she resumes taking classes three times a week.

Shira Freeman Klinger has been with the Washington Ballet for eight years and has performed in this version of "The Nutcracker" seven times.

"I like that this one is different," she said. "As a dancer, I've seen ‘The Nutcracker’ so many times and they usually don't vary that much."

This is her second year as a Frontier Girl, taking the place of the Russian soldiers during a scene with Clara, the prince and the Sugar Plum Fairy, Shira said.

"The costume is a green dress with multi-colored fringe and some red and blue beading," she said. Her toe shoes are dyed green to match the dress.

Frontier girls are designed to represent the early farmers and plantation owners who settled the region, Shira said, not so much the pioneers who discovered the western part of the country.

The costume does include a raccoon-skin cap, however, dutifully pinned down so it does not fly off during the performance.

While dancing with professional ballerinas can be intimidating, Shira said the key is to know "you can perform with the same technique and artistry as they do. You need to learn you can fit the part even if you're dancing right next to them."