Tally Ho! They’re Off And Running 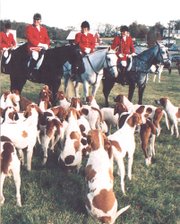 Seventy-six years ago Bob Hanson, astride his pony, “Bunny,” rode with Potomac Hunt. “I was about the same age as some of these children I see out here today,” the octogenarian remarked while he and his wife JoAnne surveyed those astride at Potomac Hunt’s opening meet on a crisp Nov. 3 morning last Saturday.

Unlike last year, when Hanson was in the saddle and the hunt celebrated its 75th anniversary as an official organized fox hunt, he opted not to ride. “Vicki called me and asked if I would deliver the traditional blessing of the hounds today and I was delighted,” he said, responding to jtMFH (Joint Master of Fox Hounds) Vicki Crawford’s request.

Breaking from tradition Hanson, as a layman, did a superb job praying for hounds (may they run a true line and always return to the comfort of their kennels); foxes (may they be strong, wise, outwit the hounds and be fruitful and multiply); horses (safe and steady); and riders (may they return safely, filled with exhilaration and appreciation that many generations before them have known.)

He even threw in a good word for farmers and landowners; without the latter there would be no fox hunting, much less 76 years of it in Montgomery County, formerly in Potomac, now in Barnesville. It was President George Washington’s sport of choice, and one that has been carried on for centuries in his country and abroad.

During the traditional stirrup cup, so named because the drink of choice (usually wine or cider) is offered at stirrup level to those astride, jtMFH Peter Hitchen quietly hinted there were foxes who lived nearby and action might be forthcoming.

Following huntsman Larry Pitts blowing “Gone Away” on his hunting horn, hounds, staff and riders responded to the call, galloping off for the chase. It was less than ten minutes before a rousing “Tally Ho” echoed through hilltoppers who lingered behind for a last stirrup cup.

It seems that Hitchen’s fox, the one who loves to torment Potomac’s hounds while in their kennel by sneaking up and stealing Pitts’ chickens, decided he would have a jaunt of his own.

Hitchen was right on one count, but as nature will have it, Sir Reynard had ideas of his own and traveled a different route than usual.

“We (those astride) never saw him. We know he’s there. There are two of them. This one usually runs straight across the railroad tracks (adjacent to the hunt club property) but he went a different way this time. He made a big circle around the Crawford (Skip and Vicki) and Miller (Carey and Jack) properties and took off,” Pitts later related. Maybe he just wanted to entertain the non-riding hilltoppers for a change. Mission accomplished.

Marge Edmundson, who has been hunting with Potomac for 30 years, said she has often seen these foxes “when I ride back by the club’s pond.” She added, “Larry has chickens and the foxes will walk right up to the barn and help themselves. They don’t like (chicken) legs, they leave them all around.”

Pitts explained, “This particular fox is no stranger to Potomac hounds, or the area. He lives near the pond. Foxes live on top of the ground for the most part. They go to ground when they need to or when the are in trouble.”

This was the first of several viewings during four hours in the hunt field. “The field thought the day was spectacular. We entertained then well,” Pitts concluded.

“My son is fox hunting right now through my forest in France,” Pierre Joyaux, said. A guest of Gay and Tony Barclay’s, Pierre explained that his three children enjoy the international sport and hunt with the Blackwood Hunt. “They chase through my forest, ‘Bornacq,’ on my 16th-century manor,” he said. Joyaux, who was among those who viewed the red fox as he traveled near the stirrup cup presentation, is from Culan village, outside of Paris.

The “Master’s Tea,” a tradition following opening hunt day, is a good place to re-hash the day’s sport. Potomac jtMFH’s Vicki and Skip Crawford, Beverley Bosselmann and Peter Hitchen hosted the party in the clubhouse, where in addition to the usual post-hunt wrap-up, a birthday moment, complete with a traditional cake, was presented to honorary whipper-in Nellie Hanagan. It wasn’t the first tribute of the day. A rousing al fresco chorus of “Happy Birthday” was offered at the meet.

Meanwhile, Hanson’s prayers were seemingly answered. Horses, hounds and hunters were safe and sound. Did anyone check the hen house?