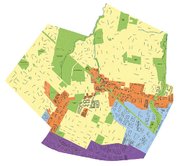 Draft of the Town of Herndon 2030 Land Use Map.

For the first time since 1990 the Town of Herndon is reconsidering its entire comprehensive plan, with a vision of drafting a document that will guide the community’s development through the year 2030. With the risk of the land use document becoming too bogged down with detail, the town’s planning staff is asked to come up with a reader-friendly summary of the plan’s major goals and changes from the 1990 document.

"We need a BLUF – a bottom line up front," said Town Council member Bill Tirrell. He and fellow council members Connie Hutchinson and Charlie Waddell met with planning commissioners David Swan and Paul LeReche and town’s chief planner Dana Heiberg last week on Wednesday to discuss the draft’s progress. Heiberg said that if the Planning Commission’s workload allows it, the draft could be presented in front of the commission for a public hearing in January or February of next year.

Hutchinson said the comprehensive plan should have an executive summary-type of an introduction highlighting the major changes from the current plan.

"Folks are going to want to be able to see what was and what is proposed," said Tirrell.

"Right now land use is the last thing in the comprehensive plan," said Swan. He said land use should be at the front of the plan, with 20 pages highlighting the goals of the community and the biggest adjustments from the current plan. "Bring that up front. What is it that we are doing here," said Swan. The 20-page land use chapter should be able to answer landowners’ and prospective landowners’ questions such as, "I want to buy that property, can I put X in there," said Swan. The rest of the plan should provide supporting documentation for the answer.

ANTICIPATING THE METRO station at the Herndon-Monroe park and ride, town planners have created a Regional Corridor Mixed Use land use area in the plan draft. The Worldgate business center is also included in this area. This area, according to Swan, will attract the most dense development in the near future. Heiberg said the exact density for the area had not been determined yet. "We haven’t pegged a density yet," he said.

LeReche said that factors other than density, such as pedestrian access and traffic control around the future metro station, have also been discussed in the area. Swan said the plan discussions of the area have considered some pedestrian experience similarities between the metro station and the downtown areas. "Can the purple area [Regional Corridor Mixed Use] be made to look like downtown," so that when a person steps off the metro station there is a sense and feel of being in Herndon, said Swan. He added that it is possible for planners to start with height guidelines and then work from there to create density guidelines for future developers.

Tirrell said that the Worldgate area in the past had not received the same attention as other parts of Herndon. "It’s been treated as a stepchild, and personally I don’t appreciate that," he said. He added that the area is an economic engine for the town. "Putting some downtown-like features there is very good," to act as a gateway from the metro into the town, said Tirrell.

OTHER ISSUES discussed in Wednesday night’s meeting included affordable housing, aging in Herndon and Herndon’s reputation as a technology hub. Tirrell said it was important for the town to come up with standards for affordable and low-income housing. The standards may be consistent with those of the rest of Fairfax County. "I want to make sure we’re discreet about what is expected for low-income or affordable housing," he said.

Hutchinson wondered if there is a way for the plan to ensure Herndon benefits from its reputation as home to many technology and communications companies. "Probably more internet traffic goes through Herndon than anywhere else. Can we get some advantage out of that," said Hutchinson.

Heiberg said that although the plan had not had a thorough review at this level since 1990, it had been amended more than 20 times since then. "It’s been an evolving document," he said. However, drafting the new comprehensive plan has been challenging for Heiberg and staff at the Community Development Department as they are experiencing staffing shortages. "There are several positions we’re trying to fill. We have very full workloads," he said.

Swan said citizen participation will be vital as the process moves along. "We don’t have all the answers right now," said Swan.