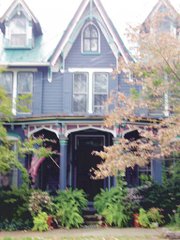 The Lynch House is home to one of Loudoun's most famous ghosts.

Loudoun has spent the year celebrating its history and the people that peppered its path. During community events, history interpreters have been as present as modern-day residents, but not all of Loudoun’s history is still living. Some of the county’s most active historical residents cannot be seen by the human eye. Ghosts, it seems, inhabit many of the county’s most famous and historic spots.

"There are a lot of ghost stories all around the county," Peter Kelpinski, a member of Loudoun’s Museum’s board of directors and founder of the Leesburg Haunting tours, said. "There are a ton in Leesburg. A lot of the ghosts in the county are connected to its history."

TWO OF THE county’s most famous ghosts are also two of the closest, living across the street from one another on North King Street in Leesburg.

At the Lynch House, Liza Thompson, known as the lady in white, is often seen standing at the foot of beds or walking the halls of the second floor.

"Everyone in the family has seen her," Kelpinski said.

According the legend, Thompson was a Civil War widow. When he husband was killed the deed to their home was left with a banker, who then also went off to fight and died. After the banker’s death, his wife tried to take the Thompson home as her own with the deed. It was only after a 13-year court battle that Thompson got her house back.

"The theory is she had to fight to keep the house, so she just stayed there," Kelpinski said.

ACROSS THE STREET the Glenfiddich House, which during the Civil War was known as Harrison Hall, was the last home of Mississippi’s Col. Erasmus Burt. Burt was wounded at the Battle of Ball’s Bluff, Oct. 21, 1861, and was taken to Harrison Hall because he was a friend of the family. A few days later, Burt died from his injuries.

Since his death people have reported seeing an impression of a body on the bed in the room where he died, Kelpinski said.

"There will be no signs of someone getting in and out of bed, just the impression," he said.

The Glenfiddich House is now home to the Miles Lehane Group Inc. consulting firm, and, Kelpinski said, people have reported seeing him or feel his presence throughout the day.

Kelpinski said people have also reported hearing the sound of a ring tapping on the banister, going down the stairs.

Burt is not the only Ball’s Bluff ghost that has been reported. Many people have reported seeing ghosts walking around the Ball’s Bluff cemetery, which is the only remaining portion of the Civil War battlefield.

NOT ALL OF Loudoun’s ghosts are Civil War related.

"Even after she died she has continued to come to choir rehearsals," Kelpinski said.

Kelpinski said he is also aware of several colonial-era ghosts.

"They tend to be only on the south side of Leesburg," he said. "We’re not sure why."

It can be difficult, Kelpinski said, to discover what era a ghost comes from, however. Much research must be done into a place’s history and occupants to determine possible identities. Other times, the ghosts will give them clues, such as when Liza Thompson would arrange research being done on the Lynch House ghost to always have her story on top.

RESEARCHERS HAVE recently discovered that Loudoun had its very own Lizzie Borden, Kelpinski said, but Emily Lloyd used arsenic, not an ax.

"Her husband, aunt and all four children died within a four-year period," Kelpinski said. "But she was only put on trial for the death of the 3-year-old, Maude."

While Kelpinski did not want to reveal the outcome of the trial, he said the verdict came in on Halloween 1872.

Recently, people at the Loudoun Museum itself have reported a ghost of their own. Kelpinski said workers have heard footsteps upstairs in the log cabin on the museum’s property and hearing someone walking around in the collections area, which Kelpenski said is locked and secure at all times.

"Upstairs in the log cabin there is carpeting, but people said the sounds were like hearing boots on a wood floor," he said.