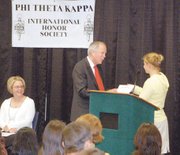 The Alpha Iota Zeta chapter of Phi Theta Kappa held its fall induction at the Manassas Campus of Northern Virginia Community College (NOVA) Oct. 14 with a reception for the new members and their families afterward. Thirty-nine members were inducted during the formal ceremony. The new members participated in the traditions of signing the membership book, lighting a candle, taking a white rose and reciting the Phi Theta Kappa oath of membership. The ceremony was conducted by chapter president Abigail Friedman, vice president Endy Yan, faculty advisors Ed Anderson and Susan Givens, and Manassas Dean of Students Victor Bibbins. Samantha Sweitzer and Stephanie Sweitzer of Leesburg and Erin Avery and Danielle Burrington of South Riding were local residents who were inducted.

Send announcements, which are open to the public at no or minimal cost, to The Loudoun Connection, 7913 Westpark Drive, McLean, VA 22102 or e-mail to loudoun@connectionnewspapers.com. Deadline is Friday, two weeks before the event. Photos/artwork encouraged. For more information, call Jennifer Lesinski at 703-917-6454. For additional listings, visit www.connectionnewspapers.com.

He is the son of William Nicol of Woodlea Drive S.W., Leesburg.

Joseph Guzman, deputy assistant secretary for strategic diversity integration, Office of the Assistant Secretary of the Air Force for Manpower and Reserve Affairs, was named one of the 100 Most Influential Hispanics by Hispanic Business magazine in its October 2007 issue.

Jennifer Weyman, a 10th-grade student at Broad Run High School in Ashburn, will be attending the upcoming National Congressional Youth Leadership Conference in Washington, D.C., Nov. 13-18. Jennifer will be among 350 top high-school students from across America who will be participating in the conference. Students are selected based upon their outstanding academic achievements and leadership potential. Jennifer was initially selected to participate in the program when she was a middle-school student at Farmwell Station Middle School. She attended the state-level conference that was held in Northern Virginia in 2005. As a former state participant, Jennifer is now eligible to participate at the national-level conference.

Held Saturday, Sept. 29, on Leesburg’s Town Green, the fifth annual "Fall into the Arts" festival was hosted by Leesburg Crossroads and the Town of Leesburg. The festival included an all-day jazz concert, a juried art exhibit and sale and wine tasting at local art galleries. A panel of art professionals, patrons and sponsors selected these four artists to receive an award in the following categories: