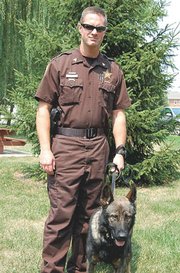 The Loudoun County Sheriff’s Office K9 Unit welcomes its newest four-legged member. Gero is a 16-month-old German shepherd from the Republic of Slovakia. Gero is partnered with Sgt. Chris Coderre, who has been with the agency since 1996. Gero will work in the Special Operations Division. Gero and Sgt. Coderre trained over the past four weeks at Castle’s K9 Inc. in Mechanicsburg, Pa. The two were prepared for everyday life on the street and will specialize in patrol and narcotics detection. Gero and Sgt. Coderre will join the four other K9 teams who work within the Special Operations Division of the Sheriff’s Office. Each dog is cross-trained for patrol work and detection work, with three dogs trained in narcotics detection and one in explosive detection.

Send announcements, which are open to the public at no or minimal cost, to The Loudoun Connection, 7913 Westpark Drive, McLean, VA 22102 or e-mail to loudoun@connectionnewspapers.com. Deadline is Friday, two weeks before the event. Photos/artwork encouraged. For more information, call Jennifer Lesinski at 703-917-6454. For additional listings, visit www.connectionnewspapers.com.

He is the son of William Nicol of Woodlea Drive S.W., Leesburg.

Joseph Guzman, deputy assistant secretary for strategic diversity integration, Office of the Assistant Secretary of the Air Force for Manpower and Reserve Affairs, was named one of the 100 Most Influential Hispanics by Hispanic Business magazine in its October 2007 issue.

Jennifer Weyman, a 10th-grade student at Broad Run High School in Ashburn, will be attending the upcoming National Congressional Youth Leadership Conference in Washington, D.C., Nov. 13-18. Jennifer will be among 350 top high-school students from across America who will be participating in the conference. Students are selected based upon their outstanding academic achievements and leadership potential. Jennifer was initially selected to participate in the program when she was a middle-school student at Farmwell Station Middle School. She attended the state-level conference that was held in Northern Virginia in 2005. As a former state participant, Jennifer is now eligible to participate at the national-level conference.

Held Saturday, Sept. 29, on Leesburg’s Town Green, the fifth annual "Fall into the Arts" festival was hosted by Leesburg Crossroads and the Town of Leesburg. The festival included an all-day jazz concert, a juried art exhibit and sale and wine tasting at local art galleries. A panel of art professionals, patrons and sponsors selected these four artists to receive an award in the following categories:

In addition, airmen who complete basic training earn credits toward an associate degree through the Community College of the Air Force.

He is the son of Chong Pyo of Angelique Drive, Ashburn.

Pyo is a 2005 graduate of Stone Bridge High School, Ashburn.

Irene M. de Leon, GRI, SRES of Keller Williams Realty in Sterling was installed as the 2008 president of the Virginia State Chapter in a ceremony held in Williamsburg, Oct. 2.