The Nationals wait for Ryan Zimmerman after the third baseman blasted a game-winning home run. 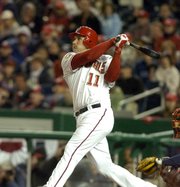 Ryan Zimmerman hit a two-out home run in the bottom of the night to give the Nationals a 3-2 win over the Atlanta Braves. 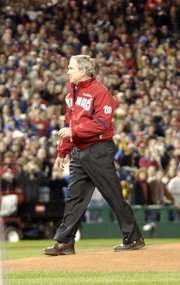 It was a storybook ending to a new beginning for the Washington Nationals.

Virginia native Ryan Zimmerman launched a 1-1 pitched into left center with two outs in the bottom of the ninth to give the Nationals a 3-2 win over the Atlanta Braves in front of a capacity crowd of 39,389 on the night that the Nationals christened their new ballpark. Zimmerman’s blast sailed over a portion of the outfield fence with the words, “Welcome Home” written on the green padding.

It was quite a homecoming for the Nationals.

“I couldn’t have written the script any better,” said Nationals manager Manny Acta. “It was a very exciting day and it was a great way to win it with the right guy up. The franchise player came through in the first game in our new stadium.”

Nationals Park, the new $600 million home of the Nationals, sits along the Anacostia River in D.C., with the Washington Monument and U.S. Capital building accenting the skyline.

“When I use the word ‘cathedral’, I only do that when a park deserves it. This is a cathedral,” said Major League Baseball Commissioner Bud Selig, who attended the game. “There are some days where it is not exactly fun being the commissioner of baseball and then there are days like this that are rewarding, satisfying and makes you proud.”

The pregame ceremonies included a video, played on National Park’s 102-foot, high-definition scoreboard, which offered fans a look at the long history that the Nation’s pastime has in the Nation’s Capital, showing footage of the Washington Senators, which played in MLB from 1901-1971 at Griffith Stadium, and later Robert F. Kennedy Memorial Stadium.

President George W. Bush threw out the ceremonial first pitch to Acta, another Washington baseball tradition, for the first time since 2005, when the Nationals organization moved to D.C.