Katherine Hughes pauses before returning to work in the field at Claude Moore Colonial Farm. 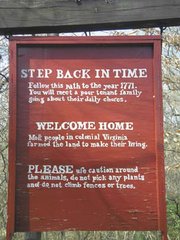 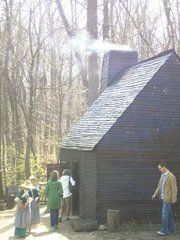 In and out of history: interpreters leave the farmhouse at Claude Moore as visitors step inside to see how a tenant family lived in 1771.

At a bend in the path, two young girls in wide-brimmed straw hats and bare feet stand outside of the split-log fence and wish “good day” to visitors. They answer a few questions, point the way up to the farmhouse, and climb back over the fence, pick up their tools and go back to tending the field. In the farmhouse, the fire is low: nothing is cooking at the moment. The farm’s family of six sleeps in the loft, where cured hams hang inches above the bedding. April means another year at Claude Moore Colonial Farm – another year of reliving 1771.

The living history farm at 6310 Georgetown Pike in McLean has a cast of interpreters who take on the roles of a poor tenant family in 18th-century Virginia. Each year the story changes a little: this year, the mostly female group explains that the farmer died over the winter, and his widow’s sister is visiting to help maintain the farm. Elizabeth Rolando is the farm wife who will take the lead in Claude Moore’s first event of the year, Dairy Day, which will be Sunday, April 13, 1-4 p.m. “We occasionally throughout the year make butter or cheese,” she said, but Dairy Day is a special event, specifically organized to show the public the process. Rolando explained that they will separate the milk and the cream, scoop off the cream to make butter and use the rest of the milk to make cheese. The cheese has to be cooked over the fire, but the butter is more of a hands-on process.

“Everybody likes to churn butter,” Rolando said. “We definitely encourage the public to get involved.”

Churning butter is a new experience for most visitors to the farm, Rolando said, but a few can relate. “Sometimes kids will say in school they put cream in a jar and shook it,” which is a shortcut for making butter, she said. “Sometimes older people will say, my grandmother or my mother churned butter like this.”

The farm uses about two quarts of cream to make butter, and about a gallon of milk to make a small cheese, Rolando said. For the event, Claude Moore is getting milk from an area dairy, but the farm may have a new cow and their own milk soon.

Katherine Hughes of Arlington plays the visiting sister. She didn’t have an active role in Dairy Day last year, but will help this year. She explained that cooler weather is better for making butter: it should take between 30 and 90 minutes to churn the butter, but on hotter days it could be longer. She described washing the butter: the process involves literally pouring water over the butter, pushing the butter to the sides, and letting the water mix with the buttermilk, which can then be poured out. Another colonial practice that surprised her was pickling butter – mixing salt into the butter so it would keep.

ROLANDO HAS BEEN at Claude Moore about two years, Hughes about a year and a half. Both have been involved with other historical re-enacting. “I started out volunteering in Massachusetts at Plymouth Plantation when I was 10,” Rolando said. “I’ve been interested in this sort of thing for a long time.” Hughes studied history at the College of William & Mary in Williamsburg, Va., and worked at the millinery shop in Colonial Williamsburg.

Rolando agreed. “People can really get into that they’ve really stepped back into the past,” she said. “A lot of people like the idea of time travel – this is a little way that we can do that.”

That type of experience is what brought Rolando from Massachusetts to Claude Moore. She now lives in Reston. “I actually really wanted to come to a place that did first-person interpretation,” she said. “It’s something that’s unusual, even in the museum world.”

THE DIRECTOR OF CLAUDE MOORE, Anna Eberly, might be the best example of someone who has been taken in by the farm. “I’ve been here 35 years,” she laughed. “I came to help a friend when they were just beginning the farm.” History was her primary interest, and she enjoyed that living history – especially on a dynamic farm – makes every year different.

“A lot of things have changed and a lot of things that have stayed the same,” Eberly said. “Probably the biggest change for us has been, when we started out we were a national park, and we still are … but now we’re a privately supported national park.”

Eberly said that the volunteers who support the farm are what keep her coming back. She tries to provide a place for people to learn and enjoy, and area visitors respond to that. “We’re on our third generation of people who love the farm,” she said. “The volunteers are kind of the life blood of the farm.”