Harrell, Richards lost for season as a result of injuries during contest with Cavaliers.

South Lakes coach Corrie Adams and her Seahawks have been hurt by several injuries this season. 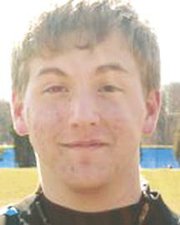 The South Lakes High boys’ soccer team earned its first win of the season, 1-0, over a talented W.T. Woodson team on April 3.

The Liberty District game was played in rainy and windy conditions at South Lakes.

It marked the first time in 10 years that South Lakes has beaten Woodson, a program that has been one of the better ones in the Northern Region over recent years.

The game’s lone goal came about 15 minutes into the contest when senior midfielder Mohamed Ahmed, a Seahawk team captain, found the net to give the Seahawks a 1-0 lead. The score held up and South Lakes pulled off the upset win.

"It was a big triumph for us," said South Lakes coach Corrie Adams, of her squad’s shutout. "Usually, if we go up in a game, we lose the lead. But we held Woodson off the entire game. The win meant so much to us because Woodson has been our Achilles Heel. They’ve beaten us 6-0 and 7-0 in recent years."

Adams said the Cavaliers applied lots of offensive pressure in the game. In all, Woodson got off 15 shots on the night.

"They had a lot of shots on us," said Adams. "Their team is quite good."

With the weather being so poor, the field conditions were muddy and slippery.

Unfortunately, two players broke their legs during the game, one from South Lakes and the other from Woodson.

The South Lakes player who suffered the broken leg was Mike Harrell, a junior outside back for the Seahawks. The injury, a broken right leg, occurred near the end of the game. The youngster was ambulanced to the hospital.

"It was a very clean tackle," said Adams, of the play in which Harrell was hurt. "Both kids ended up falling into each others’ legs."

Initially, it was not obvious that Harrell had suffered a fracture.

"He’s a great player. We didn’t even know it was a fracture," said Adams. "But the X-rays showed a pretty hard fracture. Thankfully, he’s just a junior."

Harrell will not return this season. But he should be able to play for South Lakes next year as a senior.

The victory was nice for South Lakes, but it certainly came at a high price.

"It was the worst weather I’ve ever experienced coaching a game," said Adams, of the conditions. "When the weather gets ugly like that, there were puddles on the field where when the ball hits, it wouldn’t go anywhere. And the intensity level was quite high."

"As intense as it was, there was great sportsmanship," said the coach. "[South Lakes] had every right to walk off the field and know they earned the win. They were phenomenal."

&lt;b&gt;AHMED’S GOAL&lt;/b&gt; was the first of his varsity career. The Seahawk midfielder has earned numerous assists during his varsity career, but had never scored. The goal came from 20 yards out and landed in the back of the Woodson net. South Lakes senior forward Santos Cerda made a nifty crossing pass from the outside to set the play up.

The goal’s assist went to Alex Stom, a senior back who a month ago committed to play the sport collegiately next school year at George Mason University.

Stom, a transfer student from Flint Hill School in Oakton, has not played for South Lakes throughout much of the season due to eligibility issues. But he is in the Seahawks’ line-up now, a much needed, high-caliber player who will be a tremendous addition with all of the South Lakes injuries that have occurred.

"He’s a phenomenal athlete who’s incredibly fast and quick on his feet," said Adams, of Stom.

The South Lakes newcomer scored a goal earlier last week in a district loss to Langley.

Adams said Stom and senior defender Kyle King, one of the team’s top players, will both see time at the sweeper and stopper positions.

"He’s already been quite an important player and contributed quite significantly," said Adams, of Stom. "He’s kind of filled the stopper spot."

Another key addition in recent weeks for South Lakes has been sophomore defender Erik Estrada, who has played outstanding soccer since being called up from the JV team.

South Lakes has losses this season to Herndon, Mount Vernon and Langley. It tied Oakton.

The Seahawks were scheduled to meet defending state champion Jefferson in a Liberty District game this week. In last year’s meeting between the two teams, South Lakes played the Colonials strong in a 3-0 loss near the end of the 2007 season.

"We’re excited about seeing them," said Adams, of the match against Jefferson. "They play with good sportsmanship. We were really happy the way we played against them last year."