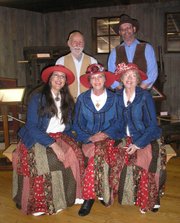 The Mill Run Dulcimer Band plays inside the farmhouse at Colvin Run Mill on a rainy Sunday afternoon.

It’s pleasantly surprising enough to find a band that has been together nearly three decades, but the staying power of the musicians makes some sense, considering their key instrument can trace its Virginia roots back over three centuries. The Mill Run Dulcimer Band, which currently also features acoustic guitar, string bass and autoharp, was formed about 1976, says founder Keith Young. He and Kit Putnam of Arlington are the only original members still playing with the group.

“We knew three songs,” Putnam recalled. They played all three during their 10-minute set at the Northern Virginia Folk Festival, a biannual event no longer held. Most of the songs they play are old-time traditional favorites, many of which have a gospel turn. Putnam says it’s easy to see why the songs have lasted, “because people don’t get tired of them.”

Putnam said that the band originally formed with people Young had been teaching to play the dulcimer or others he knew through music. He still teaches people to play, mostly in two large group lessons a year, which draw about 50 people each. They play the Appalachian or fretted dulcimer, which lays in the lap of the musician, as opposed to the larger hammered dulcimer. Generally the instruments stay within a diatonic scale, like the white keys on a piano, without the half-steps to sharp or flat notes. Young, who lives in Annandale, was first lured by the instrument as a family business in the early 1970s. “My brother made a few,” he said. “So I started making them, and went to the festivals with him.” Since that time, Young estimated, he has made over 1400 dulcimers. The dulcimer’s appeal straddled music festivals and re-enactment events for history buffs, and soon the visitors to the brothers’ booth started asking how they could learn how to play.

But Young’s musical influence began long before that. “My mom always played the piano, but I never wanted to play the piano much,” he said. He grew up in West Lafayette, Ind., across from the field where the marching band from Purdue University practiced. As a child he even joined the group from time to time, mimicking the routine he found irresistible. “I like music and rhythm – I’ve had that since I was a kid.”

For the most part, Young said he learns to play songs by ear instead of reading music. He’s adapted to several instruments. During the Colvin Run concert, Young played the autoharp, and took a brief turn on the string bass as its usual player, Kathleen Gotzmer of Accokeek, Md., was a featured singer. She has been with the band for 17 or 18 years. Judy Larrabee and her dulcimer come from Fredericksburg – “we love each other and we love playing,” she says – and though she has not been playing with the Mill Run Dulcimer band very longer, the newest member is guitarist Dave Caouette of Greenbelt, Md., who first sat in with the band last November. The band usually takes a hiatus over the winter months and begins playing at Colvin Run Mill and other outdoor venues when the weather is more hospitable. The next Colvin Run concert is May 18, but the band will have an upcoming concert May 4 at the Vienna Town Green. For more on Young and the Mill Run Dulcimer Band, including a calendar of upcoming events, a list of instruments for sale and a discography for the band, visit http://appalachiandulcimers.com.