Writing a New Book on Art

Art and literature are hand-in-hand in public art initiative.

'Path to Glory' by Springfield artists Barbara and William Gordon will be on display at George Mason University. 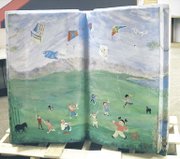 'Look Inside and Find Great Things' by Trudi Arnold of Fairfax Station can be seen at the Burke Centre Library. 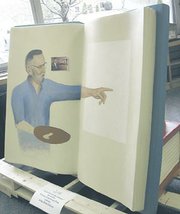 High school senior Aaron Eby used a photo as inspiration for the design of 'Volunteers in the Library' for the Kings Park Library.

Throughout Fairfax County, writing a new book on art and writing art on a new book amounts to the same thing. Art in the Pages is a public art initiative by the Fairfax Library Foundation. A few weeks ago, local artists began working on larger-than-life sculptures of open books.

Last weekend, the final products went on display at a reception at a vacant library in the City of Fairfax. All of the book sculptures have homes for the spring and summer at area libraries and community buildings, before a final reception and auction in September.

Burke artist Kirsten Schneider was excited for the opportunity to decorate a book because reading has been a big part of her life. "My son and I use to read tons and tons," she said. Her design, "Once Upon a Time," was inspired by Jasper Fforde’s books and the idea of characters having lives of their own. The open pages — the front of the sculpture — show the process of a story and the back highlights classic scenes from literature, including a jungle with Curious George and a mermaid swimming in the ocean.

Schneider’s book will be on display at the Lorton Library.

Schneider, who works mostly with pastels and pencils and has recently been focusing on portraiture, was one of several artists who worked on the sculptures at the old Fairfax City Regional Library on Chain Bridge Road — the library recently moved to a new building nearby on North Street. She said that working with other artists helped her grow creatively. "This has been one of the best experiences of my life," she said. "It’s been so much fun working together, I’m sorry it’s over."

Janet Morgan Stoeke of Fairfax also enjoyed working alongside other artists. "They’ve done a really beautiful thing pulling these artists together," she said. "We’ve been painting our hearts out." She hopes the success of this initiative prompts similar projects. "We got this venue and this opportunity and it’s just whet our appetites for more."

Stoeke’s design is literally a page out of her own book: "It’s Library Day" is one of the more than 20 children’s books she has published, with another set to come out in June. Her book sculpture, which will be installed at the Fairfax County Government Center, shows a scene where children gather around a librarian to hear a story.

FREDERICKSBURG ARTISTS Becky Huffman Hubbard and Cathy Smith collaborated on a single sculpture, called "Classic Reflections," which can be seen this summer at Clemyjontri Park in McLean. Both women worked on Fredericksburg’s public art project of large sculptured fish, but the book sculpture was particularly appropriate for Smith, who is author Herman Melville’s great, great granddaughter.

Coincidentally, Hubbard had already decided that one of the books on the back of the sculpture should be Melville’s "Moby Dick" before Smith told her about the relationship.

Hubbard came up with the "classics" theme when she first heard about the project. "I didn’t want it to be Fairfax-based, I wanted them to be universal," she said. "I went back to when I was reading to my children."

The front of the joint piece shows a title card, "Peter Rabbit by Beatrix Potter," with the capital letters done in mosaic, and begins the story, "Once upon a time …" with a mosaic rendering of Peter Rabbit.

Hubbard, a painter, approached Smith about adding mosaics to the book for "some pop, some pizzazz." At the same time, they wanted the basic design to be very clean and easily seen from a distance. "When we worked on the design, we wanted to make it simple," Smith said.

Ashburn artist Karen Kovechi also drew inspiration from children’s books. She said that both children and the parents who read to them can appreciate that theme. "I wanted something that would be whimsical and fun," she said.

Her sculpture references "Charlotte’s Web," "The Secret Garden," "Harry Potter and the Sorcerer’s Stone," "The Tale of Peter Rabbit," "Frog and Toad Together," "Winnie the Pooh," "Where the Wild Things Are" and "Stuart Little." It is called "All Fairfax Reads" and will be at the Chantilly Regional Library. Kovechi said she logged 98 hours working on the project. "It’s hard to realize that we’re through," she said. But being done does have its benefits: "Watching people enjoy the work that we created is just wonderful."

Still, Hubbard found the size a challenge, especially because she was painting words onto her book. "I never want to do lettering again," she said. Smith’s main concern was the process of her mosaics. "Grouting makes a mess," she said. "I worried about the paint." She said that small touch-ups were needed.

Stoeke had to adjust to the scale of the sculpture as well. For her books, she said her composition space is usually 5 inches by 8 inches, so adapting her published page to the page of the book sculpture was her first step. The project also opened up a new medium for Stoeke. "I used to be an oil snob," she said, but she learned that acrylic paint has improved and may use it more in the future.

"I’ve never worked this big or with curved forms," Schneider said. Her composition faced those challenges head-on, with a three-dimensional approach to her chosen scene, just before the cow jumps over the moon.

Kovechi paints wall murals, and so is accustomed to larger-scale paintings. "This was a nice working size," she said.

The book sculptures will be on display for the rest of the spring and this summer at libraries and parks in Fairfax County and the City of Fairfax. A final reception and auction is planned for Sept. 20. The books may be kept by their major sponsors may be donated to the library branches or auctioned with proceeds to benefit the Fairfax County Public Library system.

For more on the Art in the Pages program, visit www.fairfaxlibraryfoundation.org/programswesupport/artinthepages/default.htm.