Reflections On A Life Of Service
Votes

Reflections On A Life Of Service

One man's 100 year journey from one century to another. 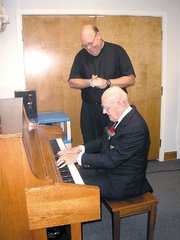 A large crowd of family, friends and members of St. James' Episcopal Church assembled in the church social room to honor Col. Paul Walters (USA Ret.), a long-time church member, on the occasion of his 100th birthday.

Col. Paul Walters (USA Ret.), center in dark suit and tie, is surrounded by multiple generations of his family during a celebration of his 100th birthday at St. James' Episcopal Church. 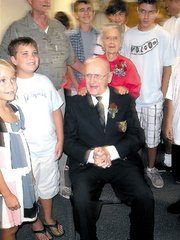 Col. Paul Walters (USA Ret.), seated, with his wife, Elizabeth, standing behind him, is surrounded by multiple generations of his family as he celebrates his 100th birthday during a reception/party in his honor at St. James' Episcopal Church.

Col. Paul Walters (USA Ret.) and his wife Elizabeth, enjoy the afterglow of the celebration by family, friends and fellow church members of his 100th birthday during a party and reception in his honor at St. James' Episcopal Church.

It's not often that someone celebrating their 100th birthday also personally supplies the music for the occasion. But, that is exactly what Col. Paul Walters (USA Ret.) did last Saturday in the social room of St. James' Episcopal Church. He provided a lively rendition of "Sweet Georgia Brown" seated at the upright piano.

Surrounded by several generations of family, a host of friends and fellow church members, Walters gave only a slight hint of reaching his centarian year the day before, Aug. 8. On that date in 1908, Paul Walters began a life journey that would span most of the world altering events of the 20th century – in many of which he would play a personal role.

"In many different ways this day is very special. I am surrounded by family and friends and very happy to be here. I also always enjoy playing the piano," Walters said as he sat at a center table with his wife of 71 years, Elizabeth.

Walters has always had a love of music. Their home in southeastern Fairfax County, where they have lived since 1965, has two pianos -- a 100 year old Steinway grand which he had restored 20 years ago at a cost of $5,000 and a spinet upstairs on the bedroom level, according to Walters. "I try to play a little everyday," he said.

That was quite obvious by the nimble way his fingers moved over the keyboard during the spirited rendition of the jazz classic to the delight of the audience gathered in his honor in the church's reception/party room. And, it was done without any sheet music -- it came from his soul, memory and talent.

Paul and Elizabeth have been members of St. James' Episcopal Church on Old Mill Road for over 30 years. "Paul still plays for our church talent contest," said the St. James' pastor the Rev. B. Kris Kramer.

However, his greatest love, next to his wife and family, was the military, where he served for 30 years before retiring as a full colonel in 1963. His last duty station was Fort Shafter, Hawaii.

"Dad had his heart set on a military career. He was working in a hardware store in his hometown in Missouri when he got word that he had received an appointment to West Point in 1929," said his daughter, Elizabeth Walters, Ph.D, now a professor of ancient art history at Pennsylvania State University in State College, Pa.

THAT APPOINTMENT TO the Military Academy started Walters on a career that encompassed World War II, Korea, The Cold War, and the early years of Vietnam. It was during the latter conflict that Walters and his wife suffered a tragic loss. Their son Robert, a 1964 West Point graduate, was killed in Vietnam in 1970.

It was Walters' second traumatic loss. Following his graduation from West Point in 1933, with a standing of 94 in a class of 347, he married his sweetheart Helen Kinder and they set out to his first duty station --Fort Benjamin Harrison, Ind. Three years into their marriage, after the birth of their child, Helen died in 1936, leaving him a young widower with a young child.

Sons James and Robert graduated from West Point in 1959 and 1964 respectively. Michael became a U.S. Army physician, while Elizabeth got her Bachelor's Degree from Vassar College and her doctorate from New York University.

Col. Walters also influenced others to make the military a career. One of those was Gen. Louis Wagner, Jr., an Alexandria resident whose father was Walters' first cousin. "Being a relative he convinced me to go to West Point and make the military a career. This is a wonderful day to celebrate his birthday," Wagner, a 1954 West Point graduate, said during the reception.

Among the crowd of well-wishers were grown children of several of Walters West Point classmates. Recently, he returned to his alma mater to attend his 75 class reunion. Walters is the oldest living member of his class and the sixth oldest living West Point alumni.

The speaker at his graduation was Gen. Douglas MacArthur, then Army Chief of Staff.

What went practically unnoticed on that graduation day was that just a little over four months earlier, Adolph Hitler had come to power, thus planting the seeds of World War II. And, America's unpreparedness was accentuated by the fact that Second Lieutenant Paul Walters was entering an army that ranked 17th in size worldwide. It was smaller than either the armies of Belgium or Portugal.

By contrast, when World War II ended in 1945 the U.S. Army had more than eight million in uniform. Walters ended up as a member of the Occupation Forces in Japan where he and his family were stationed at Camp Hakata for three years.

Throughout his years of military service Walters served not only in command positions but also graduated from a variety of educational assignments at both military and civilian institutions of higher education. While at UCLA he earned a Master's Degree in Applied Physics.

As stated in an essay about his life prepared for his birthday celebration, "Each day, Paul raises the American flag in front of his home, and when time permits plays on the piano. Without the likes of Paul Walters and many others like him, our nation would not have achieved its current state of freedom, liberty, and prosperity."