A Peachy Stay-cation For Everyone
Votes

A Peachy Stay-cation For Everyone

If it’s August — it must be the Peach Festival. 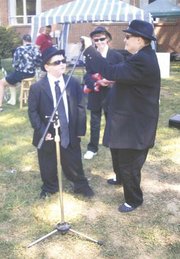 Three performers from Triple I Entertainment present their version of The Blues Brothers during Wesley United Methodist Church's 2008 Peach Festival. 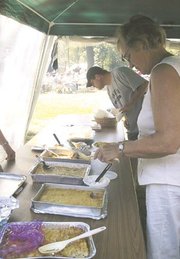 Lining up to sample the various peach deserts was a major event during Wesley United Methodist Church's 2008 Peach Festival.

A hungry crowd lines up for hamburgers, hot dogs and much more during Wesley United Methodist Church's 2008 Peach Festival.

For the seventh year in a row, residents from throughout southeastern Fairfax County, Alexandria and surrounding areas flocked to Wesley United Methodist Church last Saturday to enjoy and participate in their annual Peach Festival. This year even the weather was peachy.

"We are very thankful for this great, cool weather this year," said Wesley UMC pastor Tony Forstall. "I also think we're more relaxed about this event this year."

Adding to this year's crowd, which usually exceeds 500 over the four hours of the festival, were members of All Nations Methodist Church of Ghana. "We've adopted that church in the last year and many of their members are here today to enjoy the festival and the peaches," Forstall said.

In addition to an array of food including charcoal grilled hamburgers and hot dogs, there was entertainment from Triple I Entertainment "Karaoke and DJ Services," Terry's School of Dance, a moonbounce room, a dunk tank, a variety of children's games, face painting, horseshoes, and a host of other activities for all ages.

The Mason Neck Lions Club offered free vision, hearing and blood pressure testing in a medical van supplied by club's District headquarters. "We have 67 clubs in this District that utilize two of these type vans," said Dave Collyer, a Mason Neck club member and driver of Saturday's van.

"We've been coming to this event for the past four years. But, the vans have been in service since 1975. Both of them are somewhere every weekend," he said. There was also a contingent from the Fairfax County Fire & Rescue Department.

OF COURSE, the real draw to the festival is the variety of peach desserts and dishes prepared by church volunteers. They range from peach cobbler to peach pie to peach ice cream sundaes and many other recipes. The peaches for the past couple of years have been purchased from Rohrer's Market on Richmond Highway.

Attendees could also purchase peaches being sold by church member Donna Adams. Sitting in the shade of a large oak tree, Adams had several boxes of peaches available for purchase. "I've been pretty busy so far and we've just gotten underway," she said.

One of the big attractions each year are the model railroading displays in the church's Fellowship Hall. Beginning in 2007 the regular HO Gauge model railroad layout was joined by an entire new display designed and operated by the Washington Metropolitan Area Lego Train Club.

Set up on the Fellowship Hall stage, every item in the display is built out of Legos — including the trains. This year's eye-catching attraction was a four foot tall model of the Eiffel Tower.

The HO display featured multiple trains, freight and passenger, as well as other operating features such as a roller coaster and tilt-a-whirl in a model amusement park. Again this year, that display was the work of the Crescent Model Railroaders.

The festival was free and welcomed attendees from near and far. It is viewed by church members as an integral part of their community outreach program. And, judging by the crowd its success is increasing each year.