A Glance at High School Sports 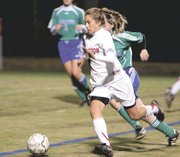 Wootton sophomore Allison Yeager led the Wootton girls’ soccer team in scoring this season, and she scored the game-winner in Wootton’s 2-1 overtime victory over Churchill in the regional playoff semifinals last year.

Wootton senior Julie Klatzkin led the Patriots last season with 65 goals and 32 assists, both team highs. She will play lacrosse at Cornell University next year. The Wootton boys and were regional champions last year. 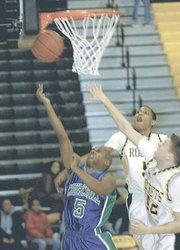 In addition to an all-around educational experience, the three public high schools that serve Potomac are second to none. Each of the three — Winston Churchill, Thomas S. Wootton, and Walt Whitman High Schools — consistently rank among the top 100 in U.S. News and World Reports, Newsweek, and other highly-regarded rating systems, yet each of the three offers an array of activities to students outside of the classroom as well, and in recent years the schools have excelled athletically as well.

Churchill — which is the only one of the three schools to draw its population exclusively from Potomac — has long-standing traditions of excellence when it comes to golf, tennis, and track and field. The Bulldog golf team, in particular, has been a banner team, winning five straight state titles before being knocked off this year — by Whitman. Yet Churchill is also highly competitive in other major sports like football, basketball, field hockey, and lacrosse.

Whitman's victory over Churchill on the links this year was an upset to some, but not to the Vikings who have had a strong golf team for some time now. They also have something else that few area public schools can boast about — a crew team. The Viking girls basketball team has been extremely competitive in recent years, winning regional titles each of the last two years and falling one game short of the state final two years ago.

Lacrosse has grown immensely in popularity both regionally and nationally in the last decade and the three Potomac schools exemplify that. Each sends competitive boys and girls teams deep into the playoffs each year, but Wootton has established itself as the best of the three in the past two years. Two seasons ago the Patriot boys were the first Montgomery County team ever to advance to the state championship game and this year their girls' team fell one game short of achieving the same honor.

No matter the sport and no matter how each team's record at the time, any matchup between these schools is a hotly contested one. The athletes involved often times are going up against friends and others that they have played against in recreation leagues over the years and when pride is on the line, the result is an intense battle.