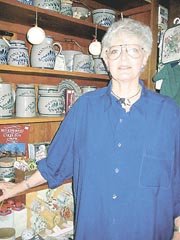 There was a time when the Windover area was made up of small modest houses, and when it snowed, Pleasant Street was set-aside for sledding.

"Everything we did as children was walking, because Mother didn’t drive in those days," said Lane Hyde, Historic Vienna, Inc.[HVI] president. "Wherever we went, we walked."

Hyde knows much about the historic Windover district. In a little house on Windover Avenue, Hyde grew up. Even when the family moved to Leesburg, her parents kept the house there, and in 1972, her sister returned to the home the Hyde family bought in 1944.

"Windover began going into a decline in the 1960s," Hyde said. "It was not until well-into the 70s that major renovations began taking place. Things started to turn around then, as families who lived there, and people moving in, remodeled or expanded."

Hyde’s late husband, Jimmy, was a builder based in the Town of Vienna, and even when Hyde lived outside Town limits, Vienna was an integral part of her life. "Jimmy was very involved with many aspects of Vienna life. I grew up here, I married a Vienna man … I already had lots of information about Vienna."

When Hyde’s husband died in 1995, Hyde decided to move closer to her sister living in Vienna.

"There was a ‘for sale’ sign on a little house near my sister’s house, and I bought it two or three days after I saw it," Hyde said. "One of the things I love about Windover Heights is that there’s so much variety in styles, sizes and architecture. There’s nothing cookie-cutter about Windover at all."

Hyde remarried and her husband, Walter, supports Hyde’s immersion in HVI. In the exhibit room are the display cases he built.

Searching for the earliest records of her family’s history in Fairfax County, Hyde traced her family’s presence in the Vienna area to Dr. William Benjamin Day, born in 1817. He’s buried on private land near the intersection of Browns Mill and Beulah roads, where the old family farmhouse stood for many years.

HYDE SETTLED on her Vienna home in late 1995, and moved in at the end of 1996 after a year of renovation.

"I was looking for something constructive to do now. Shortly after moving in, I was talking to Daphne Sloan, who really built up Freeman House and Historic Vienna, Inc.

"She suggested I consider joining HVI. I went to a membership meeting, and I thought they were interesting people. Paul Snodgrass did a presentation on genealogy, and I thought that was interesting, too. I joined, and the first thing I did was the annual book sale.

"A year later, I was coordinating the book sale."

The book sale, along with sales from the store and memberships, are the three main sources of revenue for HVI. The Parks and Recreation department of the Town of Vienna owns and maintains the structure known as Freeman House, but HVI maintains and pays for every single thing inside the structure, said Hyde.

"We preserve history, records and artifacts, from the past, because we are a product of our past," said Hyde. "It’s where we come from. It holds the lessons we can draw from.

"If we don’t preserve the history, we’ll lose it."

FREEMAN HOUSE was renovated in 1976, and held an occupied apartment in what is now the exhibit room until about five years ago, Hyde said. "Several years ago, we asked ourselves, ‘what are we going to do next to really fulfill the mission of this organization?’ We realized we could take the apartment and turn it into exhibit space.

"The best thing that happened in Historic Vienna is opening the exhibit room. A big part of our mission is education. The exhibit room gives us another means to educate.

"The first exhibit was on the Freeman family. It was a Freeman who started the volunteer fire department in Vienna, in fact."

HVI advances its educational mission on several fronts: exhibits, membership meetings with their educational presentations, the museum, Freeman Store itself, which Hyde refers to as a "living history exhibit," and special events, such as the Civil War encampment coming up the end of July.

HVI sponsors the occasional bus tour to a historical site, book signings, and history mini-camps in line with a specific theme, and co-sponsors the annual "Walk on the Hill" and Church Street Holiday Stroll. It is a very active 15-member board, Hyde said.

OPENING ON NOV. 11 is a new exhibit, "Vienna Remembers World War II Veterans," in cooperation with Vienna Post 180 of the American Legion. HVI is conducting interviews with Vienna-area veterans and their families, collecting memories and memorabilia.

"These memories of individuals give life to history. We have the building, and as important as it is to Vienna’s history, it is, nevertheless, just a structure. What makes it come alive are the memories and recollections of all these people.

"Recollections and history give richness and context to what we have now."