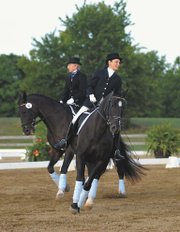 Combining pair’s figure skating and horse riding might at first seem like a bad idea full of injured people and horses. However, when the graceful choreographed movements of ice skating and the style and form of dressage riding are combined then the result is something called a pas de deux and according to the riders who participate in it, it is absolutely stunning. Residents will be able to see for themselves though as Morven Park will be hosting the Caroline Muldoon Pas de Deux Cup Challenge, Saturday, Aug. 9, as part of its Summer Fling Dressage Show.

"The challenge is a competition based on two horses performing a choreographed performance to music," Charlie Muldoon, director of development at Morven Park, said. "The basis of it is a type of equine sport called dressage. This is one of the higher up competitions of it. Two riders and horses come together and practice for months to get ready. It’s a rare competition because it takes so much time to prepare for and it’s one of the more exciting events of the dressage world."

THE EVENT, which is named after Muldoon’s mother Caroline for her work with horses in the area, is one of the more prominent pas de deux competitions. The cup attracts a strong group of riders, as it is one of the few competitions to offer a cash prize of $5,000 for winning. So far, the event is scheduled to have eight groups of riders.

"My daughters were amazed that horses could do the movement and be so synchronized with such wonderful choreography. It just held their attention," Kelly Plunkett, who attended the event last year and is now working with it, said. "For me it was just amazing to see the level of expertise with the horse and the rider."

In the competition, two riders perform a routine that must feature certain move sets that judges will follow. The event is freestyle, so riders choreograph their own routines around a song and then get the horses to work together within it. Competitors are judged on their synchronization, style and difficulty and the scores go toward their year-long point score.

THAT CROWD is composed of not only dressage fans but people from all over said Plunkett and the entire event is designed around the family coming and having fun and learning. People are encouraged to bring food or a picnic while they watch the competitions or they can buy it from vendors that will be at Morven Park. Much of the proceeds from the event will benefit programs at Morven Park and while there is a VIP tent that costs a bit more, ticket prices are kept low so that anyone can attend.

"We’d love everybody to come. The tradition of the riders is to be in black coats and a tie and all that stuff, but the tradition on the outside is for everybody. It’s just so beautiful there and everything is for the public to come watch," Muldoon said.

"One of the things I’m really trying to let people know about is that you don’t have to be in the equestrian community to enjoy this," Plunkett said. "We want people to come out and have a good time and have a great Saturday afternoon."

The event will also allow for attendees to get a truly up-close and personal view of the horses and the riders. Not only will the riders be around to answer questions about riding and horses, but they will also be happy to talk with children and adults about the sport.

"This year there will be tables and people can come up and talk and ask questions. Any event rider loves to have people come and say ‘hi’ and talk with us about everything," Stephanie Alvourd, of Waterford, who has competed in the cup for the past two years along with her daughter, said.

The arena and seating for the event is also one of the best for viewing say the cup’s organizers. All of the seats are up close and allow for a great view of the riding unlike at some other competitions where bleachers move the audience further away. This allows for viewers to really get a grasp on what the riders are doing and appreciate the difficulty of the choreography.

"The great thing about this is that the seats are set up right to the arena, so everybody regardless of ticket, has front row seats. Everybody has great seats," Muldoon said.

"I like the atmosphere a lot [at Morven Park], being around all the people helps you get into the rides. I think it’s a lot more fun when you have more people out there to watch," Adriane Alvourd, 14, who will be competing in the pas de deux with a friend and also riding in a quadrille event, which is four horses performing instead of just two, said.

Aside from that, riders like the pas de deux because it is fun to ride with someone else in what is usually a solo sport. But the event isn’t just exciting for the riders. Both Alvourds said that the horses really get into it, too.

"The music really helps and I think the horses get a bit more show offish and it’s just beautiful. It has a nice harmony. I think they usually like moving so in sync. They look forward to it," Stephanie Alvourd said.

"These horses are finally tuned and they’re waiting for a signal from the riders," Muldoon said. "The riders and the horses are on the same wave length mentally and physically and keeping them correctly together is what the rider does. They’re so precise and you’re down to a foot apart and the horse doesn’t make a move until the rider says to make a certain move."

While this kind of precision riding takes an expert to accomplish, one does not need to be one to watch it. Much like figure skating, the movements and actions of the horses can be appreciated by anyone said Stephanie Alvourd.

"It’s just very interesting to be able to see the movements and the horses and see how well everything fits together," Adriane Alvourd said.