Arlington and Alexandria honor the freeing of slaves on Juneteenth. 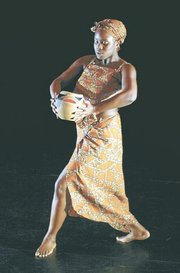 Alexandria will be hosting a traditional South African dance troupe in celebration of Juneteenth.

The Columbia Pike Community Chorus will be performing a concert in honor of Juneteenth.

&lt;b&gt;JUNETEENTH,&lt;/b&gt; the celebration of the emancipation of the slaves after the Civil War, got its start on June 19, 1865.

&lt;p&gt;It was that day that Union General Gordon Granger and 2,000 of his troops arrived in Galveston, Texas after the end of the war. Prior to this time, Abraham Lincoln’s Emancipation Proclamation had little impact on the lives of slaves in Texas because the state was still controlled by the Confederacy.

&lt;p&gt;Ever since that fateful day, June 19 has become Juneteenth, a day for African Americans to celebrate their freedom and remember their history.

&lt;p&gt;“We are aligning ourselves with our brothers in South Africa,” Hicks said.

&lt;p&gt;Part of this year’s Juneteenth celebration is a concert by the Lesole Dance Program, an African dance troupe that focuses on educating its audiences in South African cultures.

One of the dances that they will be performing is the Gumboot, which involves the slapping of boots together. Hicks said that this dance developed when South African miners were banned from speaking to each other on the job. “It evolved into a form of communication as well as a dance form.”

&lt;p&gt;&lt;b&gt;ARLINGTON&lt;/b&gt; is also hosting a Juneteenth celebration. Trinity Episcopal Church, located on Columbia Pike near South Courthouse Road, will be the venue for “Changed My Name,” a choral concert that showcases the lives of Harriet Tubman and Sojourner Truth.

&lt;p&gt;The Columbia Pike Community Chorus, a mixed-race group that operates out of Trinity and is led by Barbara Stefan, is performing the concert. Stefan said that audiences attending her concert should be prepared to learn.

&lt;p&gt;Reverend Kim Coleman is the head of the church and will also be portraying Tubman in the performance. “It is going to be an amazing celebration,” Coleman said.