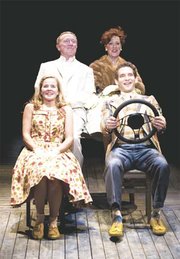 Although Signature Theatre's recent experiment with sending a small show from Shirlington to Broadway didn't work out ("Glory Days" closed the same day it opened), their effort at bringing big Broadway talent to Shirlington has been a smashing success.

The Kander and Ebb Festival began with Hunter Foster and Will Chase filling the larger of their two theaters with their soaring voices in "The Kiss of the Spider Woman." It continued with a smaller, almost chamber music version of an earlier Kander and Ebb musicals "The Happy Time" in the smaller house. Now it wraps up a fabulous spring with a new production of "The Visit." This is a musical Kander and Ebb had hoped would head to Broadway after its 2001 premiere in Chicago, but which folded there shortly after the mood of audiences shifted in the wake of the terrorist attacks that Sept. 11.

It was the last new Kander and Ebb musical to open before Fred Ebb died in 2004. The team's partnership had begun nearly four decades before and had given Broadway the scores for such major hits as "Chicago" and "Cabaret."

The production here at Signature has major Broadway talent in all departments - on stage and off - and it shows. This is the work of people who know exactly what they are doing and are working at or near the peak of their powers.

On stage, the amount of performing magic is proportional to the importance of the part. The story, drawn from the play by Friedrich Durrenmatt, centers on the richest woman in the world. Legendary Broadway star Chita Rivera (the original Anita in "West Side Story" in 1957 and winner of Tony Awards in two Kander and Ebb musicals, "The Rink" and "Kiss of the Spider Woman" - not to mention the original Velma Kelly in their "Chicago" and Rosie in "Bye Bye Birdie") is the focus of attention the entire time she's on stage, which is exactly how it should be.

This fabulously wealthy woman (the character, not the actress) is here to buy vengeance in the form of the death of a man who did her wrong in her youth. That man is the second most important role, and, in it, George Hearn is the next most impressive performer. He's also the holder of two Tony Awards: one for originating the role of Albin in "La Cage aux Folles" and the other for the butler in "Sunset Boulevard." When he lifts his mellifluous baritone on Kander's lovely melody for "You, You, You" with Rivera, or all by himself for "I Must Have Been Something" he is superb and his acting is affecting in a complex role.

There are supporting performers of note as well, with Mark Jacoby (the original Father in "Ragtime") as the town's obsequious mayor, and Jeremy Webb and James Harms also do some fine work.

The effort is sensitively directed by Frank Galati, inventively choreographed by Anne Reinking and features a twelve-member orchestra under the baton of Jon Kalbfleisch. Susan Hilferty has designed strikingly sumptuous gowns for Rivera that make it easy to believe she might be the richest woman in the world, and the entire production plays out on a large space designed by Derek McLane and lit with atmospheric skill by Howell Binkley. The combined effect of all these talents is an evening of unalloyed theatrical satisfaction.