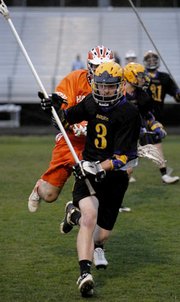 The Bruins will look to compete in the Patriot District this year.

&lt;b&gt;Quotable:&lt;/b&gt; “This is the team. We are going to do it this year. These kids feel it.” – head coach Steve Price

&lt;b&gt;Outlook:&lt;/b&gt; Before the Bruins’ opening game against state champion Robinson, head coach Steve Price talked to his team in the locker room.

What started as an inexperienced sophomore-heavy team three years ago has turned into one of the most experienced squads in the Patriot District. The Bruins’ top offensive weapons, Woody Kidd and Anderson Caldwell, have two years of experience under their belt. Goalie Will Peabody has minded the net for the same amount of time.

“They are getting better at playing team lacrosse, team defense, team offense. They are capitalizing on different situations,” said Price.

The Bruins took the two-time defending champs to the brink, coming up just short 8-7. Despite the loss, Price believes that the game was a big confidence booster for his squad.

“I was very pleased with our play. I thought the game could have either gone either way,” he said. “I think that it is okay to step up and play great competition right away. I knew that we were going to step up and play well. Last year, was a different story. I had a very young team. This year, the same kids are back.”