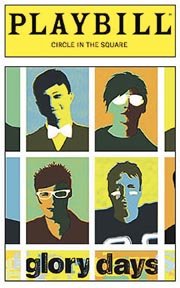 If you missed the world premiere of the locally written coming-of-age musical "Glory Days" at Arlington's Signature Theatre in January, you will now have to travel two hundred miles north to see it. The production has transferred - lock, stock and original cast - to a theatre on New York's West 50th Street seating over twice as many as could fit in Signatures 250-seat theater in Shirlington.

Often there will be a pre-broadway tryout of a musical on its way to "The Great White Way." However, it is exceptional for a purely local production, which was planned simply to run as part of a regional theater's season to be picked up for a transfer without re-casting, re-designing, re-working and re-directing the show.

The transfer of "Glory Days" to Broadway is just the latest in a series of unpredictable events in the development of the show. It began as a project between two musical theater lovers who grew up as friends in Montgomery County. Nick Blaemire wrote the songs. James Gardiner wrote the script. Both were working to develop their careers as actors in musical theater and they both landed slots in the musical theater-acting workshop that Signature's Artistic Director Eric Schaeffer runs for talented newcomers at the Kennedy Center. While there, they played for him one of the songs from the show they were writing.

It was a one-act, one-set, four person show about the night when, after their first year of college, four young men who were buddies in high school reunite and discover how they have begun to grow apart as they mature at different rates. Apparently Schaeffer liked what he heard, for he agreed to work with them to develop their musical. The work progressed to the point where he directed the world premiere of the fifteen-song musical at Signature in January.

The songs are youthful, rock-oriented pieces that use rhythm well, from a driving beat for songs such as "The Good Old Glory Type Days" and the boastful "We've Got Girls," to escalating power for emotion-laden numbers like "Other Human Beings" and "Open Road."

The show impressed not only the local audiences at Signature, but a team of Broadway producers who saw in it a piece ready for the big time. They didn't want to change it. No big production numbers, lines of chorus girls or flamboyant scenery extravaganzas would be added. They thought it would work in the 623-seat Circle in the Square Theatre just the way it did in "The Max" at Signature.

So, how is the show on Broadway as compared to the show in Shirlington?

Almost exactly the same, which is to say quite good indeed. The only noticeable difference is the performance of Andrew C. Call as the member of the group who resists change. While all four performers were very good in the premiere, Call has taken his performance to a deeper level than he did at Signature. The change helps the show become even more involving and affecting.

With a four-piece band placed behind the bank of stadium lights that form the back wall of the set, the sound fills the Broadway hall just as it did the smaller "Max" at Signature's Shirlington facility.

as Broadway, and edits Potomac Stages, a website covering theater in the