West Springfield is united after a first round region victory. 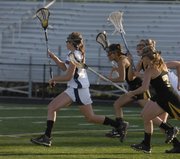 The Spartans couldn’t get away from Annandale, who scored with 43 seconds left to capture the Patriot District title.

The West Springfield girls lacrosse team had a five days to ponder what could have been. Heading into the Northern Region playoffs, the second-seeded Patriot District representative wanted to avert a district championship hang over, and move on to the district quarterfinals.

West Springfield hosted Langley, the Liberty’s third seed, on Tuesday, downing the Saxons in a wild 17-15 affair. The Spartans will now face Oakton, the fourth seed from the Concorde, who pounded Yorktown, 21-4, on Tuesday.

Top-seeded Annandale captured the girls district title with an exciting, yet gut-wrenching 11-10 defeat of the Spartans on May 8. It was a rematch of last season’s district championship, except that last season, West Springfield ended as the victors.

junior Rachel Tomlinson and Bonnie Lalich, the younger sister of current University of Virginia quarterback Peter Lalich, helped to displace Hayfield and South County in the first two rounds. Tomlinson scored five goals against the Hawks and another five on six shots against the Stallions.

In the championship, the Spartans faced for the Atoms for the second time this season. Annandale stole a 10-8 decision on the road on April 7, giving West Springfield one of its two district losses.

But these were the playoffs, and the Spartans, who had been hit hard by graduation last season, had won six straight following a 4-4 start. And junior Rachel Tomlinson and Bonnie Lalich, the younger sister of current University of Virginia quarterback Peter Lalich had been torching the net. Tomlinson scored five goals in the 12-5 Hayfield win and another five on six shots in the 15-11 defeat of South County.

West Springfield (10-5) actually controlled the time of possession, had more shots, scooped up more groundballs, but Annandale freshman goalkeeper Emma Barker made sure it wasn’t to be. Thwarting six-of-seven point blank shot attempts in the second half en route to erasing a three-goal halftime deficit, the Atoms pulled off the come-from-behind victory.

Atom junior midfielder Annie Weiser scored the last of her game-high four goals, which would prove to be the game-winner, with 43 seconds left to seal the raucous win.

That was incentive enough for the young Spartans to prove their meddle against Langley.

&lt;b&gt;MEANWHILE, THE SPARTAN&lt;/b&gt; boys lacrosse team ended their season with a first round exit to Langley, the Liberty District champions. Playing in a doubleheader right after the girls, the Saxons spanked the Spartans, 11-2, to earn a Thursday quarterfinal meeting with Concorde power Oakton, who defeated Mount Vernon, 12-5, on Tuesday.

It was another setback for West Springfield, who finished 7-6 overall and lost 9-4 to eventual tournament winner Annandale in the semifinals of the district tournament.

After a midseason five-game winning streak, the Spartans dropped two one-goal games and four of their last six.