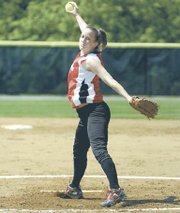 Katie Briggs struggled early on, but shut the Wildcats down for the most part.

Outstanding pitching and defense, along with some timely hitting, helped lift the Herndon High girls’ softball team to a 2-1 playoff win over Centreville last Saturday afternoon.

The victory boosted the Hornets (14-8 record) into the district finals, where they lost to Robinson on Monday night, 4-2, at Chantilly High School. Next up for Herndon is the this week’s 16-team Northern Region tournament.

Herndon, which lost twice by shutout losses to Centreville during the regular season, did just enough offensively to get past the Wildcats in Saturday’s playoff meeting. The Hornets broke a 1-1 tie in the top of the sixth inning by taking advantage of two Centreville errors in the inning.

Herndon senior catcher Jasmine Craun opened the sixth by hitting the ball to the shortstop position. The result was an error that allowed Craun to reach first base. The next batter, sophomore first baseman Tori Thompson, moved Herndon’s courtesy runner over to second base.

Moments later, a wild pitch set Herndon up with a base runner on third with one out. The next hitter, senior second baseman Chelsea Roseberry, struck a groundball towards the second baseman. The ball got through for an error, easily plating the go-ahead run and giving Herndon a 2-1 lead. Centreville pitcher Brianne Pease retired the next two batters to get out of the inning with no more damage.

The 2-1 lead ended up holding up for Herndon. In the bottom of the seventh, the Wildcats had a runner on third base with two outs before Herndon pitcher Katie Briggs ended the game by striking out Centreville hitter Kirsteri Sepulveda.

For the game, Herndon had seven hits offensively, while playing a flawless defensive game with no errors. Centreville, meanwhile, had nine hits and two errors.

&lt;b&gt;HERNDON&lt;/b&gt; received an outstanding game from Briggs on the mound. The senior allowed base hits to three of the first four batters she faced in the bottom of the first inning before settling down. Centreville managed just one run in Briggs’ difficult first inning to take a 1-0 lead. The first inning Wildcats’ run was the result of an RBI base hit off the bat of junior catcher Victoria Marvin, which plated teammate Cara Donovan.

But Briggs, with the help of her excellent defense behind her, shut down Centreville from that point onward. The Wildcats did threaten at times. In the third, they put runners on first and second with one out before Briggs coaxed a pop up out and then got a strikeout to get out of the jam.

She faced the same scenario in the fifth with Centreville runners on first and second with one out. But, on a 3-1 pitch, she got Marvin on a pop-out for the second out, then got her eighth strikeout of the game for the final out of the inning.

Centreville ended up with the nine hits, but Briggs seemed to be at her best when the Wildcats were threatening. The Wildcats stranded 11 runners.

Briggs said she is usually a bundle of nerves before games. But the prior day at school, she joked with herself that getting nervous was no longer an option.

"Usually I’m really nervous and shaking in my shoes," said Briggs, with a laugh. "But today [against Centreville] I had a weird calm."

It showed. Time after time when the Wildcats were threatening to break through for a big inning, Briggs took her time and made the big pitches she needed to.

"I kept cheering her on and telling her she could do it," said Craun, Briggs’ batterymate at catcher.

And her biggest pitch might have been the one to end the game when she fanned Sepulveda, the Wildcats’ No. six hitter in the line-up, swinging. Briggs has seen Sepulveda play over the years and knew she would be a tough out.

"I know her and she can hit," said Briggs.

But the pitcher hung in there and got the final out.

"I thought I was going to cry," said Briggs, recalling the emotions she felt when Herndon had won the game. " It was exciting."

Craun said getting that final out of the game was nerve-wracking. But in the end, it was a joyous Herndon squad that was advancing to the finals.

"I’m really happy for the team," said Craun. "We wanted it real bad."

The catcher was pleased with the way Briggs pitched.

"I thought she did a great job," said Craun, of the right hander. "We’re happy for her."

&lt;b&gt;HERNDON&lt;/b&gt; scored its first run on an RBI single on a groundball into center field off the bat of Briggs in the third inning. The RBI single, which came with two outs and plated teammate Whitney Small, tied the game at 1-1.

It was a huge moment in the game and marked the first time the Hornets had scored a run against Centreville in three games this season. The Wildcats had beaten the Hornets 2-0 and 7-0 in regular season meetings.

Craun said Herndon did not get discouraged after falling behind 1-0 in the first inning.

"We knew if we let [the 1-0 deficit] get us down, it would be very hard," said Craun. "During the game we were cheering each other on. We really wanted this game because they had beaten us before."

Going into the semifinals game, Herndon coach Bonnie O’Hearn said her team needed to hit the ball better and play solid defense in order to beat Centreville. And it went without saying that the Hornets needed a strong outing from pitcher Briggs, which it got.

"She pitched a fantastic game," said O’Hearn, of Briggs. "She allowed a little more hits than I liked, especially at the beginning of the game. She was struggling a little bit [early on]."

Prior to Centreville’s final at-bats in the seventh, the coach asked Briggs if she was strong enough to continue pitching. The Hornets had talented senior Katie Rynex, who began the season as the team’s starting pitcher before an injury took her out of the line-up, ready to come in out of the bullpen if needed.

"I left [the decision] to Katie Briggs," said O’Hearn.

And Briggs was up to the task of getting the final three outs.

The win boosted Herndon into the district finals for the first time in the program’s history.

Win or lose in the finals, Herndon has qualified for the upcoming 16-team Northern Region playoffs for just the third time in school history.

The Hornets will be looking to make a strong run at regionals in coach O’Hearn’s final season as the team’s head coach.

O’Hearn, who has been the coach of the Hornets for 13 years, is stepping down due to physical ailments. She is due to have knee replacement surgery in the near future. This spring season has put an exclamation point to an outstanding coaching career for O’Hearn at the helm of the Hornets. And Herndon would love nothing more than to close O’Hearn’s tenure as head coach by winning a few region playoff games.

The All-Concorde District team was recently named. Herndon had two First Team selections – Briggs at pitcher and Hvozdovic in the outfield. Three Herndon players made Second Team. They were Roseberry (second base), Craun (catcher) and Thompson (first base).

&lt;b&gt;In Monday’s title&lt;/b&gt; game against Robinson, Herndon scored single runs in both the top of the first and top of the third innings to go ahead 2-0. Katie Briggs, Herndon’s starting pitcher, homered in the first for the Hornets’ run. Later, in the third inning, Briggs knocked an RBI single for the 2-0 lead.

Robinson tied the game with two runs in the bottom of the fourth, then scored two more in the fifth to take the lead for good.

Herndon finished the game with eight hits off of Robinson pitcher Erin Henning. Briggs, hitting in the No. 2 spot of the order, had three of those hits. Herndon first baseman Tori Thompson, meanwhile, had two hits. The other base hits for Herndon came from leadoff hitter Marra Hvozdovic, Stacy Fox and Julia Miller.

On the mound for Herndon, Briggs worked 4-2/3 innings as the starter, and reliever Katie Rynex worked 1-1/3 innings. Defensively, Herndon committed no errors.