Stone Bridge senior reaches out to help students in Africa. 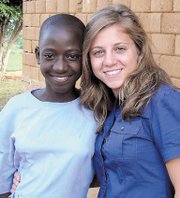 Bayati Mary, a student at The Humble School who is in the equivalent of fifth grade, with Christine Coogle during her trip to Uganda in July.

Students from The Humble School, from left, Bayati, Erusa and Stefie with Christine Coogle, third from right, who is wearing a traditional Ugandan dress called a gomesi, during a church mission trip this summer.

In July, Christine Coogle, 17, spent two weeks in Mukono, Uganda, as part of a mission trip with Crossroads United Methodist Church, helping the organization, The Humble Way, which promotes education in the African nation. There Coogle spent time at The Humble School, a primary school, as well as visiting other churches in the area and assisting in the building of a clinic near the school.

But it was the students that made the biggest impact on the Stone Bridge senior. So much so, that she recorded a compact disc of Christmas songs and will hold a benefit concert at the end of the month, with proceeds from both projects going to help the secondary-school students that have recently graduated from the school she visited just months ago.

"I talked to my parents about doing a benefit concert. My parents talked to Mark Odell [a founder of Artist Owned Records in Ashburn] and it kind of evolved," Coogle said of the CD project. "When we started I didn’t know what charity I would support, but I did the church mission over the summer to Uganda and so it seemed a natural fit."

Odell agreed to donate studio time and studio talent to the CD project.

"Christine is actually a joy to work with," Odell said. "She is a bright young lady … a perfectionist. Most of the efforts were spent polishing and improving her vocal levels. She was a real joy."

COOGLE, WHO plans to make music a career, is a student of classical music and as part of the Washington International Opera Institute for Young Singers, performed on the Millennium Stage at the Kennedy Center in 2007. So when choosing songs for her first CD, she selected 13 Old English and French — which are sung in English — standards. Some familiar, such as "O Come, O Come Emmanuel" or "God Rest Ye Merry, Gentleman;" others maybe not so well-known such as "In the Bleak Midwinter" or "The Infant King." A lot of the songs she had done with her music teachers. The others she found by doing research on the Internet.

"I kind of wanted to do something different," she said of her choices.

Coogle and her accompanist did the arrangements for a couple songs, while for the remaining pieces, she stayed true to the original.

THE ENTIRE process for the CD took nearly a year with Coogle starting her search for songs in January, then spending the winter researching licensing fees and practicing vocals and music. She starting the recording process in May in order to have a finished product ready for sale by October.

And by most standards, the recording process seemed to run smoothly.

"It’s not uncommon to be in the studio for 25 takes for each song," Odell said. "Christine had nothing over 12."

Coogle said she averaged four hours of studio time anytime she had an evening free, usually about twice a week.

"I just squeezed it in," she said.

Odell said Coogle’s CD project was a natural fit for the studio, which specializes in contemporary Christian artists. He said the studio will occasionally get involved with charitable pieces when it has the time.

"Her proceeds are going to charity, it made sense," Odell said about being involved. "Christine is not a Christian artist per se, but it is Christmas songs … you can’t separate Christ from Christmas.

"It was our contribution to the cause. … We did it to help."

WHILE COOGLE is hoping to attend Vanderbilt in the fall, where she wants to double major in vocal performance and linguistics, music isn’t her only passion. She plays rugby, and until last year played soccer. In addition, she belongs to several clubs at school — some of which she serves as an officer, volunteers at the library and is an honors student who was one of several students recently honored at the Loudoun County Public Schools’ Excellence in Education banquet.

Music is a dominate in her life, however. She has taken lessons at the Shenandoah Conservatory for the past three years, takes piano and teaches it to elementary-school students, and is co-president of her school’s choir department.

She became interested in the mission trip through her piano teacher, Susan Yantis, who had made a similar mission trip previously.

"I wanted to go on a mission to Africa for a long time," Coogle said. "My piano teacher had gone before. She planted the African seed in my heart."