A Cemetery and a Park
Votes

A Cemetery and a Park

Design elements include rows of headstones and a pavilion with a memorial wall of names. 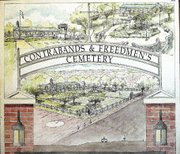 Although Mount Vernon architect C.J. Howard designed the original concept plan for the Freeman’s Cemetery Park, the planning process will probably make substantial changes to the design over the next few months.

Although C.J. Howard originally planned to have an African-American Union soldier at the southern end of Freedman’s Cemetery answering the Confederate solider statue eight blocks to the north, the steering committee overseeing planning for the park nixed that idea as too militaristic. Instead, committee members decided to use a statue used in one of the other 200 proposals that were submitted as part of a competition that included entries from all 50 states and 20 countries. They felt it would better reflect the population that was buried there because all the military burials were moved in 1865 to the Alexandria National Cemetery.

"I wanted to create a park that had the feel of a cemetery," said Howard, a Mount Vernon architect. "It has a sense of memorial without the headstones overwhelming everything."

Howard’s vision for the Freedman’s Cemetery Park is based on the original 1864 design layout, with 600 headstones representing about a third of the actual burials that took place during the rest of the 1860s. In one part of the park a statute will feature six African-American Union soldiers acting as pallbearers for a hexagonal casket bearing scenes of emergence from slavery. The old cart paths that formed an axis within the space will become walkways connecting cemetery space and open space to a nature area west of the park. Earlier this month, the steering committee asked Howard to add an eternal flame and interpretive panels.

"It will be somewhat like a cemetery, but not exactly," he said. "This is more of an abstraction."

In September, Howard’s proposal was announced as the winning design, and he received a $10,000 first-place prize, his winning design will be used as the framework for a detailed site design with a $1.5 to $2 million construction budget for the Cemetery Memorial. From 1864 until 1869, the cemetery was the burial ground for as many as 1,800 freedmen — black men, women and children who escaped slavery and sought refuge in Alexandria during the Civil War. More than 100 African-American soldiers were also initially buried in this cemetery, although they were moved in 1865 to the Alexandria National Cemetery. The park is scheduled to open in 2010.

"We will have lots of opportunity for public input," said Emily Baker, the city engineer that is managing the project for the city. "A lot of the details are still being worked out."

&lt;b&gt;THE IDEA FOR&lt;/b&gt; a park to honor the freedman’s cemetery grew over time, but the pieces started falling into place in 2000, when Friends of the Freedmen’s Cemetery secured a Virginia state highway marker for the site. In 2002, City Manager Phil Sunderland modified a settlement agreement with the Federal Highway Administration relating to the replacement of the Woodrow Wilson Bridge to include a new park honoring the freedman’s cemetery. The modification included the acquisition and enhancement of the cemetery site at South Washington and Church Streets as well as funding for the purchase of land to construct ballfields on Witter Drive adjacent to Telegraph Road. In 2004, the city of Alexandria entered into a new agreement with the Federal Highway Administration and the Virginia Department of Transportation to ensure the protection of the graves, which were then located under a gas station.

"I’ve never heard of a cemetery being rezoned for commercial use," said City Historian Michael Miller shortly before the park was consecrated last year. "It doesn’t make a lick of sense."

The land passed through several owners before being donated to the Catholic Church, which put a stipulation on the deed that the land not be used for a gas station. For some reason, the stipulation was revoked in 1955 and the City Council later approved the location of a gas station on the property. Now — with 20 years of hindsight on the mystery and a massive collection of research on the topic — Miller thinks that it’s possible the City Council members of the 1940s and 1950s knew a cemetery was on the property and chose to look the other way.

"The tax map from the 1930s identified the property as ‘Old Negro Cemetery.’ So all they needed to do was look at their own records," said Miller. "I don’t think the City Council acted totally out of ignorance."

A team of archeologists recently completed an investigation to determine the location of extant burials — discovering a 13,000-year old projectile point along the way. Although the graves themselves were not unearthed, shafts revealed coffin shapes and some coffin hardware. Archeologists who led the investigation suspect that the graveyard may have had a central east-west lane through the cemetery and north-south paths separating several rows of graves.

"The freedman’s cemetery is one of the most significant African American sites in America," said City Archeologist Pam Cressey. "What the community is doing by rediscovering it and memorializing it makes it even more significant."