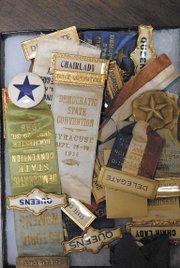 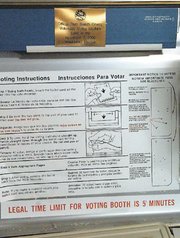 An official voting machine, chads and all, registered for the election of November 11, 2000 from Palm Beach County in Florida. 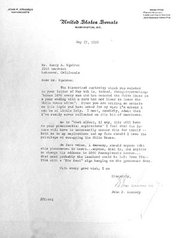 Reading the text of Sen. John Kennedy’s 1959 letter to California journalist Harry Squires, it’s easy to wonder about the time invested in responding to the correspondence. Did an aide draft the document? Was the senator trying to seek media exposure? Was it some kind of strange premonition? The answers may be unknowable, yet the piece of paper seems to illuminate its own story.

In the letter, which will be auctioned on Nov. 1 by the Potomack Company, Sen. Kennedy (D-Mass.) was obviously trying to be responsive yet ambivalent about the journalist’s inquiry about some numerical bit of obsessive-compulsive fixation. Yet an air of detachment is evident in the yellowed-piece of Senate stationary. The premise of Squires’ original letter to Kennedy, which will not be part of the "American Historical and Political Session" was apparently this: "since 1840 every man who has entered the White House in a year ending with a zero has not lived to leave the White House alive," a phrase Kennedy chose to quote verbatim.

"He’s talking about his own death in an abstract way, said Susanna Brockman, director of gallery relations at the Potomack Company.

&lt;b&gt;THE AMERICAN HISTORICAL&lt;/b&gt; and Political Session is one of the three groups of items that will be part of the November Catalogue Auction. Others sessions include political memorabilia and decorative arts. Items range from an 1876 centennial flag to a 1909 inaugural plate commemorating the election of Secretary of War William Howard Taft (R-Ohio) and his running mate, Chairman of the House Indian Affairs Committee Rep. James Schoolcraft Sherman (R-New York). Those in attendance will also be able to purchase a Theodore Roosevelt calling card or a signed Kennedy photograph.

The value of the items is, of course, a matter of supply meeting demand. Everything is for sale at some price, and these items are no exception. Take, for example, the prescient Kennedy letter. The auction house estimates the letter to be worth anywhere from $4,500 to $6,500. But the real value is a matter of who shows up in November and what price points seems reasonable during the head of the session.

"It will go for what people are willing to pay for it," explained Brockman.