A Family that Plays Together
Votes

A Family that Plays Together

Latest generation of Nelsons bring their act to Jaxx. 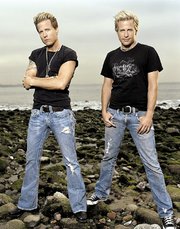 When asked to explain how family has influenced his musical career, Gunnar Nelson just laughs. "We could talk about that for hours," he said. "My family’s been doing this for 100 years."

By "this" Nelson means playing music and creating number one records for a living. Add his twin Matthew and the brothers round out a genealogical line most musicians would envy.

After big band success, the twins’ grandparents, Ozzie and Harriet Nelson, reached near immortality with "The Adventures of Ozzie and Harriet," the long-running television sitcom. The TV series made way for Ricky Nelson, one of the most influential rock artists of the 1950s and 1960s. Ricky Nelson cleared way for his sons, the current part of three successive generations of number one hits with 1990's "(Can’t Live Without Your) Love and Affection."

Nelson, the name the band that Gunnar and Matthew Nelson have always gone by, continues to tour and plays to sold out crowds around the world. The twins work in both new and old material, including several Rick Nelson classics, in order to honor their father’s contribution to music. They’ve spent most of the past decade touring, playing their father’s music with the Ricky Nelson Remembered tribute show and working on preserving his legacy with the Rock and Roll Hall of Fame.

In the late 1980s and early 1990s, the brothers appeared on magazine covers from Rolling Stone to People and the family’s A&E Nelson Family "Biography" episode is still the top rated "Biography" installment ever.

Still, the ebbs and flows of the music industry make room for regular change in the most popular genres. "[Nelson] was the band for MTV’s pop metal generation and then Nirvana and the flannel bands took over in the '90s. We decided to give arena rock a rest," said Gunnar Nelson, but "we never stopped."

In the spirit of not stopping, multiple opportunities came Nelson’s way. From participating in VH1’s popular "100 Greatest Songs of the 90’s" to Matthew Nelson's recording for the American Music Awards, the band has kept its music in the forefront. Gunnar Nelson was offered the opportunity to put together a rock band made up of members of 1980s and 1990s hair bands. Scrap Metal, comprised of the brothers, Eric Martin (Mr. Big), CJ Snare (Firehouse), Kelly Keego (Night Ranger), and Mark Slaughter (Slaughter) plays like "a live version of an 80’s mix tape."

Nelson's first tour in 15 years began this summer, reuniting most of the original band that includes drummer Bobby Rock.

With 1980s pop-culture on the upswing and genre-like bands such as Journey, Firehouse and Poison making their own comebacks, Nelson couldn’t have picked a better time to once again pursue this part of their musical legacy.

"Life is a series of comebacks, for everyone, no matter what it is you do," said Gunnar Nelson. "Music is a communal language. I’m maniacally passionate about it. I roll out of bed in the middle of the night and get an idea down before I lose it. It’s in my blood."