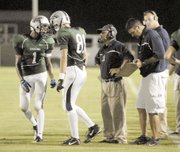 In so many words, Everett jokingly thanked Bendorf for how well his team ran the football.

Bendorf, typically polite and understated, thanked Everett for the compliment and added that it just wasn’t how he was raised, slinging passes from sideline to sideline.

About a half-hour before, though his Robinson Rams had suffered a 21-14 loss to Westfield, Mark Bendorf employed the same run-oriented philosophy.

The Bendorf brothers have been coaching football in Northern Virginia for the past 25-plus years and they’ve been doing so with a stout set of principles.

Three threads are sewn through every team the duo has coached: a consistent running game, a tough defense and a stellar kicking game.

“I don’t think you can line up, throw it all over the yard, and win consistently,” said Pete Bendorf, whose team is 3-2 this season, 2-0 in the Patriot District. “If you throw it 50 times a game, eventually your defense is going to be put in a bad situation, or you’re going to find a night where the weather’s really crappy.”

“We both put a lot of emphasis on the kicking game, and I’ve just seen too many games won and lost in that area,” said Mark Bendorf, whose Robinson Rams are 2-3 overall, 0-1 in the Concorde District. “It’s a source of pride that we’re always sound in our kicking game, with our coverage and our protection.”

&lt;b&gt;THE BENDORF FAMILY&lt;/b&gt; moved to the area in 1967 and both boys attended Marshall High School. Mark, the older brother, graduated in 1974 and Pete graduated shortly thereafter in 1979.

After a series of assistant jobs for each, both Bendorfs landed at high-profile programs by the mid-1990s. In 1992, Pete Bendorf took over at Oakton and eventually won a Northern Region title in 2002.

Mark Bendorf, after serving as the defensive coordinator under one of his high school coaches from Marshall, Nick Hilgert, was appointed head coach at Robinson in 1997 and promptly went 14-0 and won a Virginia AAA state title.

Both have found similar success, but, admittedly, both have done it different ways.

“I’m probably a little more easy going than he is,” said Pete Bendorf, who became the director of Student Activities at Madison in 2003 and moved to South County when the school opened in 2005. “When he puts his mind to something, there’s no deviating from the path. He’ll stay up all night to get the problem done, but I’m not that way. I’ll try to figure it out, and if I can’t, I’ll sleep on it and come back the next day.”

“I focus in and get tunnel vision,” Mark Bendorf said. “I’m still hurting from Friday because it’s still a game I felt we should’ve won. Pete’s a fierce competitor but he handles the ups and downs of football better than I do, there’s no doubt in my mind.”

Pete’s wife Debbie was diagnosed with Osteosarcoma, a disease in which malignant cancer cells are found in the bone, on Aug. 3, 2007, the Friday before football camp was scheduled to start.

With ideas swirling that he should take the year off, Debbie instead insisted that Pete continue coaching.

“To be the husband that he needed to be, the father for [the family’s three boys] and still lead that South County football program … that was just amazing for me to see him do that,” Mark Bendorf said.

Debbie Bendorf went through 10 1/2 months of chemotherapy and had surgery to remove the tumor, with the recovery going “so far so good,” according to her husband.

During the time spent caring for his wife and children and while running on minimal sleep, Pete Bendorf coached the Stallions to a 6-5 record, losing in the first round of the Northern Region playoffs, and learned a thing or two about what’s important in life.

And, believe it or not, it doesn’t involve running the football. It has a lot more to do with balance.

“You go through something like that and it really puts your life in perspective,” Pete Bendorf said. “We as coaches probably put in too much time and put too much of our soul into coaching, but I think when you put in somebody who’s dealing with cancer, that’s a battle you can’t lose.”