Recruit Me: How Far Some Will Go
Votes

Recruit Me: How Far Some Will Go

Thousands of dollars and miles, all to get that elusive scholarship.

A junior on South County’s softball team, Stephanie Sbardella and her family have been very active during the recruiting process. After every college camp she attends, Sbardella sends a hand-written thank-you letter to that school’s head coach. 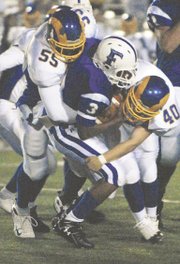 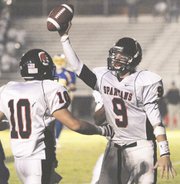 With 5,872 career passing yards -- the 14th-most in Virginia AAA state history -- West Springfield’s Bryn Renner, committed to the University of North Carolina, has been one of the area’s most sought-after recruits.

A senior linebacker on Centreville’s football team, Holland Anderson, in order to showcase himself, recently attended the Nike Football Combine in Baltimore on Wednesday, March 28. 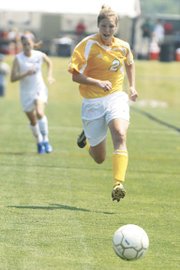 LeighAnne Baxter, a senior on Robinson’s girls’ soccer team, earned a scholarship to Richmond after scoring or assisting on every goal the Rams scored during last year’s Virginia AAA state tournament, which her team eventually won, 2-1, over Battlefield. 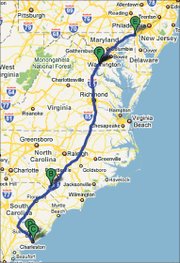 The Sbardella family traveled more than 1,200 miles one weekend.

Perhaps the only thing as practiced as Stephanie Sbardella’s swing may be her penmanship. After each of the collegiate softball camps that Sbardella, a junior third baseman at South County, attends, she has made it a point to draft her own personal thank-you letter to that school’s coach.

In the past two years, Paul Sbardella, Stephanie’s father, can count on one hand how many times the family has stayed home for the weekend, instead of electing to attend some sort of camp or clinic, which the Sbardellas believe are imperative for Stephanie’s recruitment as a college athlete.

During one particular weekend this past winter, the Sbardellas left Lorton on a Friday morning and drove to the University of North Carolina at Pembroke -- roughly 350 miles away -- for a camp. Later that day, they drove 167 miles to Charlestown, S.C. and stayed the night.

The next day, Stephanie Sbardella attended Charleston Southern University’s camp from 10 a.m. until 5 p.m. and then hopped back in the car for a 10-hour drive to the University of Delaware, which was Sunday’s destination, again for a camp.

“It’s something that she’s really interested in,” Paul Sbardella said. “I’m just there to support her. … But it is a lot of driving.”

Paul Sbardella estimates that he’s spent between $7,000-$10,000 on travel expenses and fees associated with all of the camps, clinics and competitive tournaments that his daughter attended during the past year.

&lt;b&gt;BY DIRECTING&lt;/b&gt; his own program at the high school level and also serving as an assistant soccer coach at Shenandoah University, Robinson girls’ soccer coach Jim Rike has been on both sides of high-level recruitment.

Rike still attends camps as a Shenandoah representative but also hears about experiences that some of his high school players have had at them as well.

The defending Virginia AAA state champs, Robinson has four girls on its current roster committed to Division-I schools, with possibly two more on the way. To combat their rigorous club schedules, Rike has started to give his players at least one day off during the week, knowing that they had spent almost the entire weekend playing soccer.

“Five of my girls are on one club team, and they’re approaching almost 150 games in a year of high level, premiere, showcase games because they keep going and going and going,” Rike said. “I worry about the effect it’s going to have on their bodies 10 years down the road.

“From my standpoint, as a college coach, I only need to see a kid a couple times to see whether he can play for me or not,” Rike continued. “I don’t see need to see him 40 times. I’ve told my girls that you can have three or four great games, but all it takes is one really bad game and that gets set in the coach’s mind and it evens out.”

Dan Anderson, whose son, Holland Anderson, plays linebacker for the Centreville football team, has tried to find a steady mix. The Andersons did fly to San Antonio over New Year’s for the U.S. Army National combine, which included 500 of the top juniors from across the country.

But the father still wants the sport to be fun for his son, an approach that has led the Andersons to attend only three high-level combines: the U.S. Army National, the Nike Combine and the Schuman Underclassman Camp. Still, Dan Anderson said that his investment in his son’s recruitment has cost more than $4,000 to date.

“You can’t overwhelm them and it’s got to continue to be fun,” Dan Anderson said. “You have to have a balance, and you have to pick two, three or four camps and that’s it. It really comes down to which ones invite you because anybody can go and pay their money.”

And just because an athlete stands out at a camp, doesn’t mean the college that notices will be a good match.

“What we find is that kids who go to these showcases get wrapped up in the recruiting cycle with schools that aren’t good fits for them,” said Avi Stopper, who co-founded &lt;a href="http://www.captainu.com/"&gt;www.CaptainU.com&lt;/a&gt; -- a Web-based recruiting service designed to match families with colleges or universities.

“You get a lot of people who go to showcases and often they do get seen, but it doesn’t make sense and suddenly they have mismatched colleges on their list. It’s really conspicuous that it’s not a good fit.”

&lt;b&gt;MARK BENDORF&lt;/b&gt; has coached multiple sports in Fairfax County for 20-plus years. Currently, he’s in charge of Robinson’s football program, a perennial powerhouse when it comes to sending athletes on to continue their careers at the college level.

Comparing football’s recruitment process to those of every other sport, Bendorf says is like comparing “apples to bricks.” Loaded with revenue and resources at the college level, football coaches can often travel to visit recruits, both to meet them and to scout them.

“If you’re a basketball coach or a lacrosse coach or a soccer coach or a swim coach, you have so many other opportunities because of those invitational meets, those tournaments, those fall leagues,” Bendorf said. “Football has none of that. There is not AAU football.”

What football does have, though, is the luxury of game film, which doesn’t always exist when talking about field hockey or swim and dive. Coaches often rely on game film and in-person assessments during the fall, and only later do they factor in camp attendance.

Jordan Stanton, a 6-foot-4, 245-pound defensive end for Bendorf’s Rams, has signed with James Madison University. Despite attending one-day camps at the University of Virginia and Virginia Tech, Stanton, who benefits from impressive, measurable numbers such as his bench press (310) and 40-yard dash time (4.7 seconds), was eventually plucked away by the Dukes.

Before signing, Stanton analyzed James Madison’s depth chart, its defensive system and evaluated his future coaches’ personalities. Not only that, he put a strong emphasis on academics and the quality of the facilities where he would spend the bulk of his next four or five years.

Stanton kept a positive outlook on the whole process, which, for better or worse these days, is becoming harder and harder to do.

“You have to put college in your mind, but you also have high school to deal with, too,” Stanton said. “Because if you mess that up, you mess everything up.”