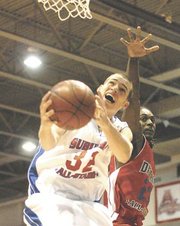 Westfield’s Chris Kearney represented the Suburban All-Stars for part of the Capital Classic last Thursday at American University. He had six points and four rebounds in 16 minutes.

A role player for his 2007-08 Westfield boys’ basketball team, Kearney took it upon himself prior to his senior year to improve his game and was rewarded with the trip to Bender Arena and a slot on the Suburban All-Stars’ roster.

During his team’s 113-104 loss to the District All-Stars -- a precursor to the evening’s marquee event -- Kearney scored six points and grabbed four rebounds during his 16 minutes of work. And, as he pointed out, any success by a big man in these high-flying all-star games is special.

“Big men aren’t really notorious for doing well in all-star games, but I just did what I could when I got the ball. No regrets. No complaints. It’s all good, all for fun.

With a 2-1 overtime victory against Loudoun Red 98, the Southwestern Youth Association Storm, a U-10 girls’ soccer team, captured the Jefferson Cup in Richmond during the last weekend in March. Among the 398 teams competing from across nine age groups, the SYA Storm was Fairfax County’s lone representative. Sponsored by Keller Williams, the Storm beat out teams from Massachusetts, New York, Pennsylvania, Maryland, Virginia and North Carolina. The Storm is currently undefeated in three season of WAGS play, with a record of 25-2-0, scoring 179 goals and allowing only nine.

The Chantilly Youth Association U-14 Division-I girls’ basketball team went undefeated during regular-season play (17-0) and finished with a record of 24-1 after winning a Fairfax County Youth Basketball League championship. Coached by Marlow Talley, the CYA team won the Braddock Road Youth Club Thanksgiving tournament and claimed second at the BRYC Christmas tournament. Zoe Beard-Fails, a 6-foot-1 wing, was elected the Most Valuable Player for the FCYBL postseason tournament while averaging 21 points, 13 rebounds, 6 blocks and 4 assists. Beard-Fails also plays for the Fairfax Stars U-13 Division-I team, which went 12-1 overall and took second in the Mid-Atlantic Girls’ National Basketball League.

On Saturday, May 9 at 8 a.m., runners and walkers can participate in the Eighth Annual Westfield High School 5K Run/Walk for Scholarships. The race, which has raised over $55,000, runs along a relatively flat course through Westfield Business Park and will begin and end at Westfield High School. Sign up by visiting www.westfieldhs.org/5krace/index.htm. Registration costs are $15 for all Fairfax County students and $20 for all others until April 15 when the fee jumps to $25 .Those registered by April 16 are guaranteed a T shirt and all are eligible for raffle prizes. Overall and age-group winners will also receive awards.

Halfway through their Division-I Premier League season, the Chantilly Youth Association Firecats -- a travel girls’ soccer team -- are undefeated. On April 4, Chantilly won matches against the Freestate Elite from Annapolis (3-1) and the VSA Heat Blue from Haymarket (1-0). Goals were scored in the morning game by Kyndall Finch, Danielle Fitzgerald and Marlo Sweatman, while Fitzgerald notched the only tally against the VSA Heat Blue. The Firecats next matches are April 18 in Mt. Laurel, N.J., where they'll play Mt. Laurel in the morning and the Pennsylvania state-champion Lower Merion Heart in the afternoon.

The Westfield boys’ basketball team will hold a series of four camps throughout the end of June and all of July. The first four-day session runs from June 29 through July 3; the second runs from July 13-17; the third from July 20-24; the fourth from July 27-31. For more information, contact Doug Ewell at 703-488-6406 or via email at douglas.ewell@fcps.edu.

The NoVa Blaze, a girls’ travel fastpitch softball organization, will conduct a tryout for its U-16 and U-18 teams on May 3 at McLean High School from 12-2 p.m. For more information, visit the Blaze’s Web site at www.novablaze.org.

NoVa West Lacrosse is conducting registration for its summer camps, clinics and select teams. Camps and clinics will be held throughout June and July, while tryouts for the U-15 Virus will be May 16 and 17. Tryouts for the Crusaders and Outbreak, two high school select teams, will be on May 23 and 24. NoVa West has recently been selected as the exclusive provider for lacrosse in the new Purcellville Pavilion indoor facility and will be hosting summer, fall and winter indoor leagues there. For more information, visit the organization’s Web site at www.NoVaWestLAX.com.