Most participants would see a 136 percent increase in payment to county. 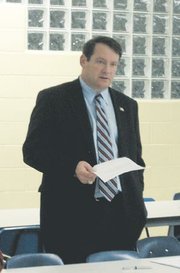 Supervisors John Cook (R-Braddock) and Michael Frey (R-Sully) are worried about the fee increases that might be forced upon county athletic organizations next year.

Supervisors John Cook (R-Braddock) and Michael Frey (R-Sully) are worried about the fee increases that might be forced upon county athletic organizations next year.

Organized sports participation across the Fairfax County is down but numbers at some local organizations, like the Springfield Youth Club and Lee Franconia Football League, are particularly low, said Lula Bauer, the Lee District representative on the Fairfax County Athletic Council.

Bauer said all sports clubs that serve residents near the Route 1 corridor have been negatively impacted. Lee District, which is home to more low-income residents than other parts of the county, has likely been harder hit by the economic recession, she said.

So Bauer, a soccer enthusiast that lives in the Franconia area, is angry that Fairfax would consider raising its athletic fees at this time.

“It is going to kill our club. Any type of increase,” she said.

For the first time, Griffin has also added a “non-county resident” fee of $30 for youth who participate in Fairfax County sport leagues. “Non county” adults, who have already been paying a fee to participate in sports leagues, would see an increase in their own fee from $20 to $30.

Teams participating in county tournaments would also have to pay more, up from $15 to $25 per event. People, such as those organizing a family reunion, would also be charged more – from $50 to $120 — for “one time” use of a county sports facility, like a softball field.

In one county youth sports club, approximately 30 percent of participating families already receive scholarship funds to help cover the current athletic fee and other costs associated with playing sports. A 136 percent increase in the rate for county residents would limit the ability of that club and others to meet the needs of families already receiving assistance, said Thompson.

An increase in the fee would also limit the sports clubs ability to provide other supplemental services, such as field maintenance and facility upgrades.

According to Thompson, the county soccer clubs collectively put over $3 million back into the upkeep of county and school fields. His own organization, Burke Athletic Club, regularly plants new grass and is in the process of replacing a series of “No Dogs Allowed” signs. The Burke basketball program is paying to replace the floor of one of the local elementary school’s gyms.

“The Springfield Youth Club is the reason West Springfield High School has a turf field. … The youth programs are constantly putting money back in,” said Thompson.

&lt;b&gt;EVEN THE HIGHER&lt;/b&gt; “non county” fee for youth participation is likely to impact some sports organizations.

The Fairfax-based soccer program run by Families In Support Of Home Education (FISHE) has 400 home-schooled participants that come from all over the Northern Virginia region, said Sarah Climkowski, one of the organization’s leaders.

Any fee increase, but particularly the $30 charge for each youth from outside Fairfax, is going to cause some families to drop out of FISHE’s soccer program, she added.

Climkowski said many of the parents participating in FISHE soccer have more than four children. They also tend to live on a single income, making it harder for them to pay out of pocket easily.

“This is going to make it so lots of them can’t pay,” said Climkowski, a Fairfax resident, about the increased rates.

&lt;b&gt;BUT WITHOUT&lt;/b&gt; the athletic fee increase, Fairfax County would be forced to make tough choices with regard to sports programming, said county staff.

If the athletic participation rate were kept at $5.50, the county might have to cut its youth scholarship program, which helps supplement the financial assistance individual sports clubs provide. They would also eliminate the youth sports officials’ subsidy, which helps pay for referees, and porta-jons from 78 park facilities.

Fairfax would also consider reducing the monitoring services that are part of its athletic field walk-on prevention program. This service allows teams and clubs that have reserved fields to call officials when unauthorized users are already playing at a facility and refuse to leave.

County staff said the athletic fee increase is also needed to cover additional utility costs, which have skyrocketed in part because Fairfax has added new lighting and irrigation systems to 22 of its fields.

It is important that Fairfax County start a turf field replacement fund, so that the locality is prepared to replace its synthetic turf facilities, which have a life space of approximately eight to 12 years, according to officials.

&lt;b&gt;RELUCTANTLY&lt;/b&gt;, the Fairfax County Athletic Council has recommended a fee increase from $5.50 to $8 to help recover some of these costs, particularly the loss of the field monitoring program and the scholarship fund.

But the group suggested that the fee increase sunset automatically in two years and several members, including Thompson, voted not to recommend a fee increase at all.

“The sports community puts lots of its own money into scholarships and supporting kids,” said Thompson.

Some members of the sports community said the county should charge adults playing unorganized sports, often called “walks-ons,” more money. Fairfax should also require people in groups of 10 or more to buy a permit when they want to use the field.

&lt;b&gt;WHEN IT&lt;/b&gt; passes the 2010 county budget April 27, the Fairfax County Board of Supervisors will make the ultimate decision about whether to raise the athletic fee or not.

The three Republican representatives on the county board – Herrity, Frey and John Cook (Braddock) – have already indicated they would not support an athletic fee increase. They said there are other services – like the county’s affordable housing program – that could be cut.

Herrity and Frey have referred to the measure as the “kiddie tax,” drawing attention to the fact that the increase would mostly impact families with children.

“I know it is called the youth sports fee but it is a tax,” said Frey.

Herrity said more should be done to encourage, not discourage, residents from participating in sports.

“It is important to get our kids off the couch,” said Herrity, who added that sports programs help prevent gang activity and other anti-social behavior.

Eventually, both Herrity and Frey would like to see the athletic fee eliminated entirely. When Frey made a motion to get rid of the payment several years ago, he said he could only get the support of one other member of the county board, Supervisor Cathy Hudgins (D-Hunter Mill).