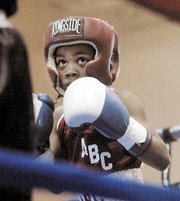 Local professional boxer Kay Koroma was sitting quietly in a folding chair, going about his business before the big fight last Saturday night. He was taping hands, knotting the strings on gloves, and even throwing some punches for warm up.

That nine-year-old Kiliel Peques, a fourth-grader at Lyles Crouch Academy, who was the boxer receiving all this attention from Koroma, is what made the USA Boxing Junior Olympic State Championships at Barcroft Sports and Fitness Center in Arlington quite the spectacle.

Youths ranging in age from 8 to 16 took part in the event hosted and won by the Arlington Boxing Club. For those younger than 13, taking home a state championship was the culmination of months of training. For those 13 and above, they move onto a regional tournament in Maryland next month. If they win there, it’s on to a national tournament in Marquette, Mich., later this summer.

Clubs from as close as Alexandria and as far away as Richmond and Norfolk were on hand for the quintessential youth boxing tournament in the state every year.

“My main focus coming to this was getting word of mouth about the sport,” said Koroma, who helps to train youngsters like Peques at the Alexandria Boxing Club. “Because a lot of kids, all they know about boxing is what they see on TV. They don’t know there’s something there for them also.”

&lt;b&gt;IT WAS A SUCCESSFUL&lt;/b&gt; first match for Peques, who just joined the Alexandria Boxing Club this past fall. He defeated Hayden Rockman of Arlington by TKO in the 70-pound weight class of the 8-9 age group, showing no signs of his rookie status.

Peques also plays football and basketball, but picked up boxing after years of playfully sparring with his father. This fall, his father finally relented and signed him up for the real deal. His aggressive style put Rockman on his heels early on in a fight that was stopped in the middle of the second round.

“I think I did my jab well and I moved my feet good,” said Peques, already sounding like a veteran of the ring.

“He did a lot better than I thought he would,” added Koroma. “A lot of kids, they get frustrated and get stressed out with all the people in the crowd. But I realized, he did pretty good since he’s used to this from basketball.”

This was the first year 8-year-olds were allowed to participate in the event, a rule change that has irked some who think the violence associated with boxing is too much for youngsters to separate from real life.

But there were plenty of precautions during bouts. Refs erred on the side of caution in matches that appeared too one-sided from the get go and stopped bouts if a big blow was landed. Afterwards, ringside doctors checked the faculties of every boxer, win or lose.

Like Peques, 11-year old Jalen Byrd of Cora Kelly Elementary was also competing in his first-ever match at the state championships. Facing Mikal Richardson in the 125-pound weight class of the 11-12 age group, that novice status had him a bit shellshocked in the beginning as Richardson began throwing wild punches in the first round.

But Byrd recovered in the second and third rounds, and realized “if somebody is swinging with a lot of haymakers, hit him with a straight right hand.” He went on to win the match and the state title on points in a hard fought, close match.

&lt;b&gt;BYRD JUST BEGAN&lt;/b&gt; boxing in January for the same reason many youths have found sanctuary in the sport.

“I just don’t want to hang around the streets and get in trouble,” said Byrd as he prepared to collect his state title medal.

Recently, the club moved out of its temporary digs off of Jefferson Davis Highway and back into a newly renovated facility at the Charles Houston Recreation Center.

“Boxing is good for them, to keep them off the streets,” said Porter. “Right here in Alexandria, kids don’t have anywhere to go. This gives them some structure and some discipline