Dan Coughlan, Frank Howard, and Mike Scott. Coughlan and Scott are proposing a minor league stadium in the Kincora section of Loudoun, minutes from Dulles Airport. 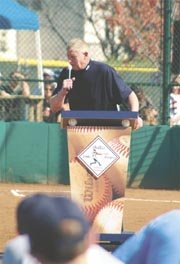 Frank Howard addresses the Dulles Little League on Opening Day. He was there courtesy of Kincora and their proposed minor league baseball stadium.

Opening Day festivities for the Dulles Little League organization last Saturday morning in Ashburn could not have turned out much better. The annual official start to the new youth baseball and softball seasons had it all — plenty of spring sunshine, the pageantry of youngsters, attired in their colorful baseball and softball uniforms, and formal ceremonies that included a special guest with the nickname of "Hondo."

More than 1,100 young players, from age’s five to 12, celebrated the new season at the baseball complex site, located on Windmill Drive. Along with the players were parents, friends, community members and Little League fans of all ages.

"We give you thanks for the beauty of this day and the gifts and the talents of the children participating," said Father Guest, of St. Theresa’s Church in Ashburn, in his invocation address. "We ask you to let the children learn the lessons of good sportsmanship."

Vendors, from sports memorabilia salespeople to those promoting Dulles Little League to those advocating a professional minor league team in Loudoun, were sprinkled throughout the three-field complex.

Prior to the 30-minute long official ceremonies, which would be hosted by Mike Epps, a Dulles Little League player agent and a pastor at a local church, the players entered the main Crittenden field by age division groups and teams. It was the final stretch of a player parade that had started at St. Theresa’s at 9.

&lt;b&gt;FOR THE NEXT&lt;/b&gt; several minutes, as Epps introduced the incoming teams, the infield became flooded with the arriving players, who chatted with their teammates.

The players ultimately sat as the ceremonies began around the pitcher’s mound. Following Father Guest’s opening prayer, Eppes introduced many of the league’s Board of Directors, some of whom trotted counter-clockwise around the infield, high-fiving the youth players.

"These are the guys who spend a lot of the time to bring Dulles Little League together," Eppes told the crowd, referring to the volunteers.

Eppes then recognized Loudoun County Girls’ Softball, made up of 250 players. The Dulles Little League extended an invitation for the youth girls’ league to join them for Opening Day last year, and asked them back on Saturday.

Moments later, Jim Klock, the Dulles Little League President and a longtime volunteer with the organization, was recognized in a surprise tribute. Two league players presented Klock with a plaque for his leadership, service and time devoted. He received a nice ovation.

"Nobody gives more time, more energy or more love to [the league] then Jim," said Eppes.

&lt;b&gt;THROUGHOUT THE MORNING&lt;/b&gt;, advocates for a new minor league ball team gained numerous petition signatures to present to the Loudoun County Board of Supervisors. One of those promoters for a team in Loudoun is John Horshok. A board member of the Harmon Killebrew Foundation, which promotes positive and healthful participation in sports for children, Horshok told the gathering that the push to build a ball park in the Kincora section of Loudoun, minutes from Dulles Airport, and to bring baseball to the county has been a project in the making for seven years.

"Wouldn’t it be fun to take the family and kids to a ball game in Loudoun County and to enjoy three hours of baseball," Horshok asked the local community on hand. "We need a few more votes by the [Loudoun County] supervisors. No tax [funding] is needed from the public."

But Horshok was not just there to promote a minor league ball team. He was there to encourage the youngsters to celebrate the new Little League season starting up.

"Today’s about new beginnings," said Horshok, directing his words to the young ball players. "It’s a day to play baseball. Baseball is a game you can enjoy your whole life."

Horshok then introduced his good friend and a hero of thousands of old time baseball fans in the Washington, D.C. area — Frank "Hondo" Howard, the greatest slugger the old Washington Senators of the 1960s and early ‘70s ever knew.

The towering Howard, at 6-foot-8, could hit a baseball perhaps longer and further than anyone who ever played the game. Known as "The Gentle Giant" for his friendly, good-natured spirit, Howard was also nicknamed "The Capital Punisher" by those who witnessed his home run heroics in major league stadiums across the country.

"The nicest man in the history of baseball," is how Horshok introduced Howard to the Dulles Little League family on Saturday.

&lt;b&gt;HOWARD OFFERED&lt;/b&gt; nuggets of advice to the youngsters, encouraging them to ask their coaches questions about parts of the game they don’t understand.

"They aren’t going to embarrass you and think you’re a dummy," said Howard, a former big league manager and current scout for the New York Yankees. "I’ve been in baseball 50 years and I’m still learning."

Other words of wisdom from Howard to the players included utilizing their time wisely, living a healthy lifestyle, being committed to being the best they can be and, "win, lose or draw, have some fun playing baseball."

He concluded by saying, "I’m delighted to be a part of the program today. I will pull for each and every team in this league and each and every player."

Following Howard’s address, Stone Bridge High senior Abigail York sang the National Anthem. Moments later, the league’s Challenger Division program, made up of special needs youngsters, was recognized. Wendy Melcer, a league board member and head of the Challenger Program, expressed her thanks to league members for all of their support to the Challenger league.

Near the end of the ceremonies, Klock, the league president, presented his wife of 15 years, Judy, with a memory of a lifetime when, in front of everyone, he asked her to marry him again. There were audible sentiments from the crowd as Judy, standing near the pitcher’s mound, said yes again.

To wrap the morning up, both Klock and Horshok threw out the official "first pitches," to 11-year old catcher and Dodgers team member Brett Kreyer, officially beginning the new season.