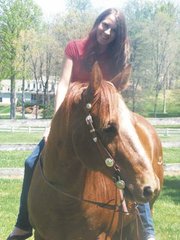 Outside of the barn her family rents in Clifton, Melissa Mull, a senior at Lake Braddock, sits atop Petey, her horse of the past six years.

When Mark Martino, Lake Braddock’s director of student activities, was coordinating a college signing ceremony back in late March, he thought he had invited all of his school’s upper-level athletes and their families.

When Susan Mull heard of the plans to host such an event, she called Martino, letting him know that her daughter, Melissa Mull, was a Division-I athlete as well and asked if it would be all right if she was included.

And so Mull, a senior at Lake Braddock, was booked.

Since she was 3, Melissa Mull has been riding horses. At age 5, she started doing so competitively. Now, after countless shows across the country and trips to the barn her family has rented for the past three years in Clifton, Mull has earned an equestrian scholarship to the University of South Carolina.

“That was a good feeling to be up there with the soccer players and the field hockey players and be like, ‘Hey, I’m an athlete too,’ Mull said. “People underestimate [horseback riding], but it’s a lot more tiring than you think.”

While horseback riding can be split into several disciplines, the two most popular are the English and Western styles. English riding, the more formal of the two, requires more jumping and dressage, a riding term that can best be described as a horse’s level of obedience to its rider. It’s also the style featured in the Olympic Games.

&lt;b&gt;WEARING A&lt;/b&gt; gold, oversized belt buckle with tight blue jeans inside the barn in Clifton on a Sunday afternoon, Melissa Mull, looking every bit the Western part, stood to the right of her 9-year-old horse, Petey. For the past six years, she and Petey have been nearly inseparable.

Despite the typical requirements of a high school student, Melissa Mull travels to Clifton at least four or five times a week, either to practice riding or just to visit Petey. A quarter horse, Petey is the ideal breed for Melissa Mull’s style of riding, compact and obedient.

“I would put a baby or a grandmother on him and never give it a second thought,” Susan Mull said.

The ability to listen is imperative for Melissa Mull’s discipline, which falls under the Western umbrella and is known as reining. First developed as a way for ranchers and their horses to control cattle in an open field, reining is comprised of circles, sliding stops and spins that the rider must navigate his or her horse through.

“It’s a lot more fun than trotting around a ring,” Melissa Mull said.

At the family’s previous barn that was closer to home, a horse trainer named Richard O’Toole, a Western-style rider himself, caught a glimpse of Melissa Mull when she was younger. O’Toole recognized the girl’s talent and offered to train her. Since, Melissa Mull has competed in shows with O’Toole and has even beaten him on occasion.

&lt;b&gt;LIKE MANY&lt;/b&gt; aspiring college athletes, Melissa Mull and her family made a DVD to showcase her riding talents. Ed Mull, Melissa’s father, had heard that colleges, with a different set of rules that horse shows, were not looking to see Melissa Mull ride the same horse she with which she had trained and developed a relationship.

In collegiate equestrian competitions, each team member draws a horse and, within a 5-minute time frame, must get acquainted with its habits. The opposing rider must also compete on that horse and whoever earns a higher score garners a point for his or her team.

“It’s really the rider’s skill that comes through,” said Melissa Mull, who curled her lower lip outward and dropped her head when the subject of not taking Petey to South Carolina came up.

On Melissa Mull’s highlight tape, the family made sure to show footage of her riding some of O’Toole’s horses, careful to demonstrate her ability to adapt at a moment’s notice. They also included a clip that illustrated the relationship that Melissa Mull and Petey have formed over the course of six years.

“We had a clip of her riding without any saddle or anything [free reining] and just guiding the horse with her legs, which you don’t do unless you have an excellent relationship with the horse,” Ed Mull said.

Melissa Mull has seen her dorm room, which includes her own kitchen, bathroom and covered parking space across the street. She has a couple of friends already at South Carolina and almost feels bad about the luxuries afforded to Division-I athletes.

But then again, whether it’s known to others or not, that’s exactly what Melissa Mull is.

“Since [equestrian] is not a sport at school, it bothers me because I feel like I don’t get the same respect as some of the other athletes,” Melissa Mull said. “Everyone thinks it’s cool, but they don’t understand how much of a sport it really is.”