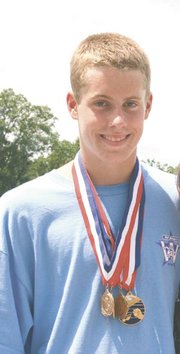 The Hidden Creek Hurricanes finished off the season with several outstanding swims at the DCCL all-star meet as well. Sierra Jeter and Tiger Barbee once again led the way with first-place finishes in each of their individual events. Jeter took first place in the 11-12-year-old girls’ 50-meter freestyle, 50 butterfly, and 100 individual medley. Barbee won the 13-14 boys’ 50 free, 50 backstroke and 100 IM. Hidden Creek was also represented in the finals by Warren Breiseth, Ben Barbee, Carolyn Barbee, Grace Nalepka, Regan Glembocki and Kelly Dore.

The team finished pool play with a 3-0 record and earned the first seed in bracket play over Basketball Stars of America (Pittsburgh), Speed City Chargers (Woodside, Va.), and Aiken Warriors (South Carolina). The prelims featured a key win over the Aiken Warriors in the final game of pool play, where Thomas Van Wazer led the team with a 16-point, four-rebound performance.

In the semifinal round, the Cavs faced off against Team Venom from Virginia and held on for an emotional 42-38 win to advance to the National Championship game. All nine players scored in the victory.

In the championship game, the Cavaliers struggled early on against Kingdom Athletes from Greensboro, N.C. before losing, 59-49. Sango Amolo led the team by averaging 13 points per game in the tournament. Although the Cavaliers fell short of winning the national championship, they made the best run in the program’s five-year history.

Registration for the 2009 Northern Virginia Senior Olympics is up 20 percent over last year at this time, according to Betsy Bailey, the event’s registration chairman. More than 25 indoor and outdoor events are scheduled to take place Sept. 12-23 at various venues throughout Northern Virginia. The registration deadline is Aug. 28 and the registration fee has remained at $10. For more information, call 703-228-4721 or check the Web site at www.novaseniorolympics.com.