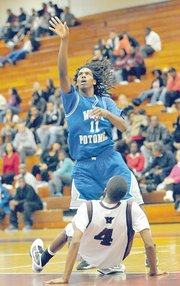 Ward, a 6-foot-2 guard, was one of four Wolverines to score at least nine points. Daryl Copeland led the way with 19 points. Keevyn Hankins finished with 18 points for West Potomac and Martez Redfearn added nine.

The Wolverines (2-1 overall, 1-0 district) led early, but Lee entered the fourth quarter with a three-point lead. West Potomac responded with defensive pressure and offensive aggression. The Wolverines outscored the Lancers 21-12 during the final period, thanks in part to a 13-of-16 performance from the free-throw line.

"We were attacking the basket," Houston said. "I thought we played really strong man-to-man defense. I thought our defense stepped up in the fourth."

Copeland, a 5-foot-8 point guard, scored 12 of his team-high 19 points in the fourth quarter while knocking down all eight of his final-period free-throw attempts.

"Our defense was better, our offense has improved," Houston said. "We’re starting to play pretty well together and understanding what we’re trying to do."

West Potomac traveled to take on South County on Tuesday. The result was not available as of the Gazette deadline. The Wolverines host Centreville at 7:30 p.m. Friday and Lake Braddock at 7:30 p.m. Dec. 22.

Engels coached West Potomac from 1986 to 2001 and led the Wolverines to their last regional championship in 1998. He was honored with a plaque before the game.

The West Potomac girls basketball team picked up its first win of the season on Friday with a 51-45 victory over Robert E. Lee. Kiara Artis, Talya Dawson and Alex Jones scored in double figures for the Wolverines in their Patriot District opener.

West Potomac hosted South County on Tuesday. Results were not available as of the Gazette deadline. The Wolverines will travel to take on Centreville at 7:30 p.m. Friday.

After winning two of three games during a four-day stretch to open the season, the Mount Vernon boys basketball team will have gone nearly two weeks between games when it takes the floor at 7:45 p.m. Friday at Washington-Lee. Head coach Alfonso Smith said the Majors have maintained their competitive nature but are ready to face another opponent.

"We just try to be creative in keeping things as competitive as possible," Smith said of the team’s time between games. "We create situations in practice where they can go ahead and compete, but they’re getting a little tired of that."

Smith said he expects the Majors and newcomer Hayfield to garner the most attention in the National District. Hayfield ended Mount Vernon’s season with a buzzer-beater in last year’s postseason.

"We performed pretty well over the last several years. I think that our opponents respect us pretty well," Smith said. "There are no nights off for us. We’re going to get everybody’s best shot."

Smith leads the Majors with 13 assists and 12 steals, and Konadu is tops with 20 rebounds.

West Potomac graduate and Gettysburg College swim team freshman Cheryl Olechnowicz teamed up with Maggie Mulderrig, Caroline Coolidge and Deirdre Purdy to take fifth place in the 200-freestyle relay with a time of 1 minute, 41.89 seconds on Dec. 5 during first-day action of the Franklin & Marshall College Invitational.

Mount Vernon High School Girls Basketball 11th Annual Spaghetti Dinner and Silent Auction will be held on Dec. 19. Tickets are $5. See a student athlete from the girls basketball team or contact Terry Henderson at 703-619-3146 or Terry.Henderson@fcps.edu.

The Beltway Box Lacrosse League is registering now for a boys high school and youth winter box lacrosse program beginning Dec. 19. Games will be played in Alexandria at the in-line hockey rink behind Francis C. Hammond Middle School. Divisions are boys high school varsity and JV and youth U-9/U-11, U-13, and U-15. A seven-game season is planned. US Lacrosse membership is required. Information is available at www.BeltwayBoxLacrosse.com.

"I was very pleased with our win, but I know there’s a lot more work to be done to be EBA champions," Avengers coach Dominic Manuel was quoted as saying on the team’s Web site. "With the versatility that our team has and size, we will be a matchup problem for any team."