Coach O’Brien anticipates his McLean team will break out of it. 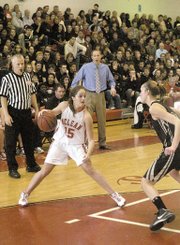 McLean High sophomore Andie Romness, with the basketball in this game against Langley, scored 13 points in the Highlanders’ district loss to Woodson last week. McLean will celebrate its Senior Night Thursday of this week against Stone Bridge.

Shooting slumps usually do not last for an extended period of time for good basketball teams. And McLean High girls coach Mike O’Brien, whose team has struggled with its shooting touch of late, anticipates his Highlanders will heat up again following tough offensive nights in back-to-back Liberty District losses to Jefferson and Woodson last week.

"We’re sort of in a shooting slump with most of the players," said O’Brien, whose team entered this week with a 10-8 overall record and a 5-5 mark in district play. "I tell the kids we’ll get through it. But we have to play good defense."

The Highlanders lost at Jefferson, 41-31, last Thursday. The following night, they had an even tougher offensive struggle in a 46-29 home loss to Woodson. McLean sophomore guard Andie Romness scored 13 points in the loss to the Cavaliers on Friday, but no other Highlander player scored more than four points. Woodson led 25-18 before taking control of the game in the second half.

O’Brien said his players took good shots and that shot selection was not the problem. Not converting its chances hurt the Highlanders.

"I’ve had no problem with the shot selection we’ve had," said the coach. "Things just aren’t falling. We’re not an explosive enough team to have a couple [key players] not score and win."

&lt;b&gt;O’BRIEN AND HIS&lt;/b&gt; coaching staff have been careful not to discourage players from shooting the ball, even with McLean in a cold spell. Getting down on the players for taking shots could lead to them hesitating to shoot, O’Brien said.

"The kids are frustrated," said the coach, of the recent shooting woes. "They feel it because they know they can compete in this district."

Other than the poor shooting, McLean is playing well in other areas of its game and playing hard as usual.

"I don’t worry about the kids not giving everything they have," O’Brien said. "And they all get along and are very unselfish players on both ends of the floor."

Going into this week, McLean was in fifth place in the eight-team district standings at 5-5. South Lakes (14-2 overall record) was in first place at 8-2, followed by second-place Langley (10-8, 7-3). Woodson and Madison were tied in third at 6-4.

McLean has beaten crosstown rival Langley twice this season. Its other district wins have come over Jefferson, Stone Bridge and Marshall.

McLean was scheduled to play district games this week at Madison on Monday, Feb. 2, and at home against Stone Bridge this Thursday night. The Thursday night game against the Bulldogs will be the Highlanders’ Senior Night. The team’s 12-graders who will be honored in pregame ceremonies will be forward Taylor Ancell, guard Caity Flint and manager Amanda Ball.

Next week, McLean will wrap up the regular season with district road games at Marshall, Feb. 10, and South Lakes, Feb. 13. The district tournament is scheduled to begin on Feb. 16 with first-round games.

The following night, McLean gave Woodson a good outing in a 54-49 road loss. The Cavaliers entered this week in a three-way tie for first place with South Lakes and Madison. Brosnan had a big night with 21 points against Woodson.

The Highlanders (5-12, 2-8) were scheduled to host Madison on Monday, Feb. 2, of this week before traveling to Stone Bridge in Ashburn for a Thursday night game.