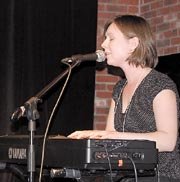 Kate Klim, who recently moved to Old Town Alexandria, won the Pop division in the song-writing contest sponsored by the Songwriters Association of Washington.

More than 900 songwriters submitted original works for judging in nine categories from Acoustic & Folk to Vocal Jazz & Blues. The Jammin’ Java music club in Vienna hosted the awards ceremony on Jan. 11. The Songwriters Association of Washington sponsored the competition, one of the longest running in the country.

Langan and Davis also won the top prize in the country music category in addition to overall honors. Their winning song, "A Thing or Two," tells how good values are as important as a fancy education.

&lt;i&gt;And I know something ‘bout

Honor and courage and doing to others

As they would do.

Yeah I may not be as smart as you,

"I had that phrase — ‘a thing or two’ — stuck in my head for a while," Langan said, "so we shaped a story around it. It’s about a college-educated son who realizes that his father, a simple farmer, knows "a thing or two" about life."

Davis, also an accountant, said they enjoy combining stories and music. "Writing and performing is great fun, especially when we find a song from the heart. But we are also glad when we can entertain others at the same time."

Langan and Smith were runner-ups in the 2008 Country Music Television song contest, and write a dozen new songs a year. They enter several contests annually and view the SAW competition as good exposure. "Chuck and I are thrilled to have our work recognized by SAW in such a public and powerful way," Langan said after the award ceremony. "These are people who know great songwriting and their recognition of our craft motivates us to keep reaching for the ring."

&lt;b&gt;KATE KLIM&lt;/b&gt;, who recently moved to Old Town Alexandria from Philadelphia, won third place in the overall judging, as well as the top prize in the Pop category. She wowed the audience at Jammin’ Java with her song "Ripple."

"I love performing, but singing my own songs is the best," she said backstage. Klim, 26, teaches piano and sings in clubs. (See &lt;a href="http://www.kateklim.com/"&gt;kateklim.com&lt;/a&gt;.)

Second place in Pop went to Fairfax resident Sophia Bass, a freshman at Eckerd College in Florida. She also won the Young Artist Award, but could not perform her song, "Some Little Girl," because she just had her tonsils removed. "It’s a great honor to win the award," she said hoarsely the next day. "Besides singing, I want to write music for movies and eventually get into music production." She recently began working with Boyd Tinsely, a member of the Dave Mathews Band, who has taken an interest in Sophia’s music. (See &lt;a href="http://www.sophiabass.com/"&gt;sophiabass.com&lt;/a&gt;.)

"We use national artists as judges," contest director Siobhan Quinn said. "We send them CDs with all the songs without identifying the songwriter. Contests help aspiring songwriters get attention and experience." Pointing at the overflowing Jammin’ Java crowd, Quinn added, "They also get a chance to perform."