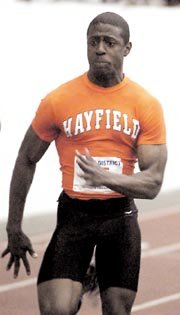 Hayfield senior Justin Jefferson finished first in the 55-meter dash at the Patriot District indoor track and field finals with a time of 6.63 seconds, qualifying for next weekend’s Northern Region meet. As a team, the Hayfield boys finished second behind Annandale.

Lee senior swimmer Steven Gifford excels at the 50- and 100-yard freestyle events, and with those less-than-a-minute-long events comes the realization that there’s a much smaller margin for error.

That’s why a quality start is imperative for Gifford to win a race — something that was achieved twice this past Saturday night at Lee District RECenter for the Patriot District swim and dive championships.

“In the 50, there’s no room for error, and I got a perfect start,” said Gifford, who won the race with a time of 21.61 seconds, his best such mark of the season. “I just tried to stay focused, and I think I did that.”

Gifford will advance to this week’s Northern Region championships, which will culminate with the 5:30 p.m. finals on Saturday at Oak Marr RECenter.

“We’ll try to lower the intensity just to get some rest,” said Gifford, who will swim next season at Old Dominion. “I think the competition there will help out, having other people faster than me pushing me to drop some more time.”

West Springfield indoor track and field coach Chris Pellegrini has spent the better part of this season trying to convince junior Paige Kvartunas that she’s ready to become one of those girls.

It’s not an insult. It’s actually a compliment.

Pellegrini feels that Kvartunas has the ability and lung capacity to become one of the district’s top distance runners, and if her performance at last week’s Patriot District championships is any indication, Pellegrini is right on target.

“I’m trying to prove to her that she’s ready to turn the corner,” said Pellegrini, whose girls team totaled a school record 111 points and finished second to Lake Braddock. The boys team was seventh with 26 points.

Senior Caroline Peterson earned a first-place finish in the 55 hurdles, finishing with a time of 9.04, while the girls 4x200 relay team (Clayton, Peterson, Kara Lewis and Alex Abrahamson) took first with a mark of 1:52.68. The girls 4x400 relay team (Melanie Fish, Abrahamson, Lewis and Emily Ellis) added another first-place finish with a time of 4:13.93.

“We’re not peaking yet,” Pellegrini said. “We have a couple weeks to go where we’re going to keep the training up, and we’re not at our peak yet for the season.”

For eight of the past nine years, Hayfield has won the Patriot District wrestling title. That wasn’t the case this weekend at Annandale High School.

Though the Hawks had eight wrestlers advance to this Saturday’s Northern Region finals at Fairfax High School, Hayfield finished second to South County at the district meet, 220-145.5.