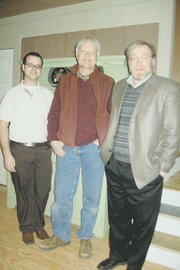 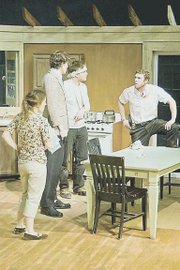 For several years, a group of theater enthusiasts talked about creating professional theater in Fairfax County. In June of 2008, their concept became reality. Housed a quarter mile from Leesburg Pike on Spring Hill Road, 1st Stage Theatre opened its 100-performance seat theater in September. On Feb. 13, 1st Stage premieres a four-man play, "Pig Farm." The play's original run, at the Roundabout Theatre in New York and the Old Globe in San Diego, was in 2006.

"We’re trying to provide a place for young local talent to launch professional careers and get professional credits to their names," 1st Stage spokesman, Brad Kalbfeld, said. "Secondly, but just as importantly, we want to provide a local cultural center where people can see new productions at a reasonable price.

"1st Stage would like to be part of the betterment of Tysons Corner."

For the principals and founding members, 1st Stage is a labor of love, Kalbfeld said.

Only artists are paid; all others, from artistic director to operations, set design and construction, and fund raising, are volunteers. Volunteers pitch in where ever help is needed.

"We all find the time when we can do what we can to contribute to the success of the theater," Kalbfeld said. Kalbfeld and artistic director, Mark Krikstan, are retired. Krikstan spent 12 years teaching drama at George C. Marshall High School, leading the school’s One-Act Play drama team to the state championship five times. Kalbfeld worked as a broadcast reporter and editor for the Associated Press in Washington, D.C., and Great Britain.

"There’s no professional theater in Fairfax County," Krikstan said. "Kids go off to college majoring in theater and have nothing to come home to professionally. When I was at Marshall, I took kids on field trips to D.C. and New York, but never locally.

"That’s where the impetus for this came from. To answer a need, to fill a void of the theater experience."

Jane Kalbfeld, Brad’s wife, studied in New York under famed acting coach, Stella Adler. She works as a voice and acting coach now. "Mark has such an eye for detail and that’s how I was trained," said Jane Kalbfeld.

There are approximately 15 people volunteering their time and skills to 1st Stage. Stage manager, Lauren Friedman, is a 2003 graduate of Marshall High School and lives in Vienna.

The theater company is a 501 (C) (3) nonprofit organization, primarily funded at this time by personal contributions. Ticket sales are 1st Stage’s main source of financial support. "We are looking for opportunities to work with our corporate neighbors in Fairfax County," Brad Kalbfeld said.

FROM THE PLAYWRIGHT of "Urinetown," "Pig Farm" is part love story, part commentary on government interference, set against the backdrop of a 1,837-pig farm. Four professional actors perform the play on a set built by theater company volunteers. 1st Stage describes "Pig Farm" as the story of a "pig farmer who's struggling to keep his business going, whose wife is dallying with the new farmhand — a 17-year-old fresh out of Juvenile Hall — and who has suddenly come under the eye of the feds, in the person of a gun-toting EPA inspector asking questions about sludge washing up on the shores of the Potomac. When the feds demand a count of just how many pigs there are on the farm, havoc reigns."

"Pig Farm" is the third production in the five-show schedule planned for this season, the first. Actors audition for the roles in all 1st Stage productions.

THE 1ST STAGE VENUE is New York-artsy, a former industrial facility turned theater with soaring ceilings. The volunteers who conceived the theater company focused on making an environment that was "interesting and different," Brad Kalbfeld said.

Sean Whinnie attended 1st Stage’s first show with a friend. After the show, they talked to Krikstan, and asked, "How can we help?" Since then, Whinnie has avidly supported the theater company, becoming its community outreach coordinator and database master. Whinnie, an energy engineer by profession, said, "this is an organization of people. We can benefit from the skills set of everybody."

"Mark, Jane and others impart their knowledge and experience to a younger generation," Brad Kalbfeld said.

Presently, 1st Stage offers a Saturday class, taught by Lucas Beck, for high-school students. The company’s goal is to offer a series of classes for both adults and students. 1st Stage plans on running a summer camp for high-schoolers.

"Our shows have gotten really rave reviews," Brad Kalbfeld said. "We have free parking, reasonable pricing for professional theater and we’re less than a gallon of gas away from most places in Fairfax County.

"When people come here, they are going to be entertained and delighted by what young local artists are doing on our stage."