One Great Night of High-School Basketball

Highlanders, Saxons gave fans an evening’s worth of thrills. 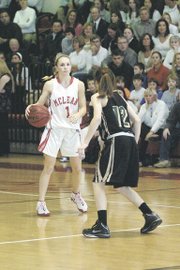 For students from both Langley and McLean high schools, the Friday before winter break has become a holiday of its own. The varsity girls-boys basketball doubleheader never seems to disappoint and this year was no exception.

The twin bill, played Dec. 19, at McLean, was split with the Highlanders taking the girls game, 35-31, and Langley snagging the boys game, 50-47, in a dramatic double overtime thriller.

&lt;b&gt;IN THE FIRST&lt;/b&gt; game — the girls contest — both teams showed their nerves with several early turnovers. However, McLean quickly overcame its jitters with senior guard Caity Flint leading the way. The Highlanders started the game with a 9-2 lead in which Flint had five points and an assist. McLean would extend that lead to 20-6 by the end of the first quarter, a lead they would not relinquish on way to the victory.

For the rest of the game, Langley attempted to chip away at the lead slowly, but never could overtake McLean.

"I knew they would make a run in the second half, they are too good of a team not to," Mike O’Brien, McLean coach, said. "We talked about it and they did. It was just all about having a big enough lead to weather their storm."

The fourth quarter was a back-and-forth, low-scoring affair in which neither team seemed to want to take control. While Langley was able to stay in it, the Saxons were not able to turn it into a one possession game.

McLean ultimately got the hard-fought win. Since then, the Highlanders have played well on way to a 7-3 overall record. They traveled to St. Petersburg, Fla., over the holidays where they took part in the Sun Coast Classic Dec. 26-29. There, McLean defeated both Clearwater Catholic, 49-31, and Mount Dora High, 54-31, before losing to St. Thomas Moore of Canada, 50-33.

The win over Langley prior to the Florida trip put the Highlanders at 2-0 in Liberty District play. It also marked the first time that McLean has beaten the Saxons in their last four meetings.

McLean, in the win over the Saxons, was led by sophomore guard Andie Romness’ nine points. Flint added seven points for the Highlanders and juniors Caitlin Baker and Melissa Wilson both contributed six points each.

&lt;b&gt;WHEN THE BOYS&lt;/b&gt; took the court for the evening’s nightcap game, the stands were already at full capacity and the stage was set. However, the game got started in the exact opposite fashion as the girls game. This time, it was Langley that jumped out to a quick 11-2 lead. The nine-point cushion wouldn’t last long, though, as McLean’s sharpshooters started to take aim and both teams went into the half tied at 19.

The second half was just as competitive as the first. McLean took the lead about halfway through the third on a three-point shot by senior guard Peter Brosnan. The Highlanders’ lead got as large as five points in the fourth quarter. But the lead had evaporated when Langley senior guard Jack McLindon (seven points) hit a jump shot at the free-throw line to tie the game with less than a minute to go. Langley had a chance to win the game in the closing seconds, but senior guard Barrett Hunter (15 points) slipped on his drive to the basket and the game was sent to overtime.

"The play I drew up was to isolate Barrett because we thought he had a good matchup and he was playing pretty well," said Langley coach Travis Hess, of that final Langley possession of the fourth quarter. "However, he waited a little too long to make his move and slipped, so we ended up not getting a shot."

In the first overtime, defense prevailed just like it did in the majority of regulation. Neither team got into any kind of rhythm and both teams managed just four points with Langley coming up with the stop at the end of the first OT.

Finally, after the frustrating first overtime, Langley star forward Derek Baker (10 points) hit a three-pointer to give the Saxons a one-point lead with 40 seconds left in the second five-minute overtime.

Baker struggled throughout much of the game, but was the hero at game’s end.

"I was so happy I made that shot, but I knew there were still 40 seconds left, so I had to get back on defense to make sure they didn’t score," Baker said.

With the win, Langley advanced to 5-0 for the first time under Coach Hess, while McLean dropped to 2-4. Both teams will meet again Jan. 23 at Langley to add another chapter to this rivalry.

"The only times we were in control of the game were at the beginning and the very end," Hess said. "[McLean] played better for a lot of the game and it definitely feels like we stole one."

This Friday night, the Langley boys will host Jefferson. The Langley girls, meanwhile, will play at Jefferson.

The McLean boys will travel to Madison this Friday night, while the Highlander girls will host the Warhawks at home.