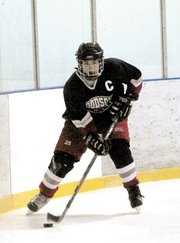 John Loveland, a junior forward on the W.T. Woodson hockey team, leads the team in both goals (9) and points (15). The Cavaliers are 1-4 after a tough early-season schedule.

Goaltender Parker Miranda, one of four seniors on the W.T. Woodson hockey team, makes a stop against Chantilly last Friday.

After Chantilly’s Chris Howland scored with 8 minutes, 55 seconds, left in the first period of a Northern Virginia Scholastic Hockey League tilt at SkateQuest of Reston last Friday night, W.T. Woodson forward Ian Alexander rushed to the far boards. He pleaded with his father to run out to the car and get a spare pair of skates.

With his father making his way to the parking lot, Alexander glided on one foot toward the W.T. Woodson bench. The front portion of his skate blade had snapped off and the Cavaliers’ best player was without an important piece of equipment.

When the new skates finally arrived, Alexander only had time to lace up one of them, so he played the rest of the game with multi-colored wheels. But luckily for W.T. Woodson, Alexander has looked a lot better this season — and throughout his career — than he did on this night, which ended with a 10-0 thumping by Chantilly.

Alexander has 82 career points over his four years with the club program and sits only seven shy of the career mark held by Reid Mayberry, whose younger brother Davis Mayberry skates alongside Alexander.

"It’s kind of cool because it shows my commitment to the team, and how I’ve been trying to get as many points as I can but still trying to help the team win," Alexander said of the record.

"He’s really taken this program to a new level," said sixth-year coach Keith Dean, who was an assistant coach when the program was launched in 2002-03. He took over head coaching duties the following year with associate bench boss Gill Egan.

"He’s a class act on and off the ice," Dean said. "He always has a good attitude. He’s a natural leader. We’re fortunate have him and we’re going to miss him."

ALEXANDER STARTED &lt;/b&gt;skating as a 4-year-old at Fairfax Ice Arena with his father and started playing in youth leagues two years later. In addition to captaining the Cavaliers, Alexander wears the "C" for his travel team: the Northern Virginia Ice Dogs.

The senior forward plans to commit to the University of New Haven (Conn.) in the weeks ahead and will join the Division II school’s club hockey program. He plans on majoring in fire science and eventually becoming a firefighter.

Dean compared Alexander to Craig Ramsay, a workmanlike, defensive center for the Buffalo Sabres, who accumulated 672 career points, once played in 776 straight games and won the Selke Trophy awarded to the league’s top defensive forward in 1983-85.

But regardless of any comparison, Alexander has been the cornerstone of W.T. Woodson’s team for awhile. He has 10 points and six goals this season for a club that has struggled a bit early, falling to 1-4 after the loss to Chantilly.

"We’re not clearing the pucks out from in front of the net, and we’re not taking the body," said Alexander, of his team’s recent woes. "Hopefully, the back end of the season we can win out and make the playoffs."&lt;b&gt;

NOT THAT &lt;/b&gt;it was done on purpose, but the NVSHL schedule-makers were not kind to the Cavaliers this season. They started out playing perennial power O’Connell (7-1 loss) and have since faced Forest Park (9-4 loss), Woodbridge (6-5 loss) and Chantilly — all quarterfinalists a year ago.

The back half of the season features slightly more manageable opponents, with Paul VI on Jan. 30 and subsequent dates with Stone Bridge, McLean, Westfield and Lake Braddock/Trinity Christian.

W.T. Woodson was without five players on Friday night against Chantilly, missing the team’s second forward combination and defensive pairing. Though the Cavaliers started strong, players wore down and Chantilly’s speed became a factor in the second period.

Such problems do not figure to occur during the second half, and with a more manageable schedule ahead, some players predict that the Cavaliers could resurrect this season and make the playoffs for the third straight year.

"With the teams we’ve played, we’ve gotten a general feel of how we’re going to do against the [upcoming] teams," said junior forward John Loveland, who leads the team in both goals (9) and points (15). "We’ll be 5-5 at the end; all of our next games besides one we’ll win."