Despite injury to Ryan Curtis, Lake Braddock boys find other ways to win. 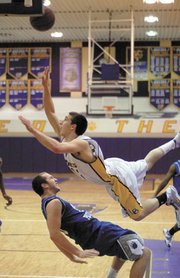 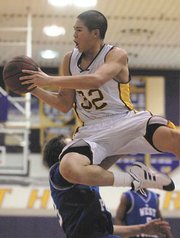 With an injury to center Ryan Curtis, senior forward Art Sinthorntham has had to step up his play. Sinthorntham contributed 17 points during a 59-45 win over West Potomac Monday. 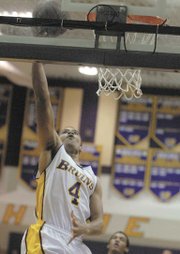 Senior Jared Watson has increased his offensive numbers recently. He notched a game-high 18 points against West Potomac and tied Dominic Morra with a team-high eight rebounds.

But after sensing a double team and the lack of open space through which to maneuver, Morra skipped a perfectly-placed bounce pass to classmate Jared Watson, who made a backdoor cut and finished the play for an easy layup.

Watson’s bucket staked the Bruins to a 41-33 lead, effectively pushing the game out of reach. But on another level, the play represented a change of sorts that has occurred off of Burke Lake Road recently.

Little more than two weeks ago, Morra, who’s having a breakout offensive season while averaging 29.9 points per game, might’ve driven the lane and forced a shot. On Monday, Morra became more of a distributor and less of a scorer.

“I think we’re doing what we have to do to win in our league,” said Lake Braddock coach Brian Metress, whose team improved to 11-5 overall, 5-4 in the Patriot District. “In our league, if you have one guy scoring all the points, he’s going to get double teamed. When he gets double teamed, another guy’s going to be able to make a play.”

The change of philosophy has happened partly because of the increased attention that’s now paid to Morra, but it has also happened because of an unfortunate injury. Regardless, Lake Braddock has achieved an offensive balance that features two quality, low-post scorers to complement one of the Northern Region’s top offensive threats in Morra.

&lt;b&gt;WITH ABOUT&lt;/b&gt; two minutes left in the second quarter of a 71-59 win over West Springfield on Jan. 13, junior center Ryan Curtis, the team’s primary inside presence, landed awkwardly and broke his leg in two places, resulting in a compound fracture.

Curtis was averaging 10.4 points and 6.5 rebounds per game at the time. But the loss stripped Morra, who often teams with junior Patch McLucas (team-high 4.1 assists per game) to run Lake Braddock’s offense, of the team’s second-best scoring option and forced both Watson and senior forward Art Sinthorntham to step into starring roles.

Both did so Monday night. Watson finished with a game-high 17 points and made seven of his eight shots, while Sinthorntham was the team’s second leading scorer with 16. Morra added 14 points and six assists and tied Watson for the team lead in rebounds with eight.

“Ryan was a key rebounder and a key contributor,” Watson said. “It’s going to be hard to replace him because he’s that good. I had to step up big time when he went down.”

Two months before the season, Sinthorntham suffered an injury to his ankle, one that required surgery and sidelined him for the first four games. Now healthy, Sinthorntham said the ankle has been getting stronger.

“We’re spreading the scoring around, which makes us harder to defend,” said Metress, whose Bruins will host Hayfield Thursday at 7:30 p.m. “That’s the way basketball is supposed to be played. It’s always harder to cover five guys than to cover one or two.”

&lt;b&gt;THE LOSS&lt;/b&gt; OF Curtis hurt, but it hasn’t crumbled the Bruins’ playoff hopes by any means. Lake Braddock suffered a 70-55 loss to T.C. Williams three nights after Curtis was lost and rebounded with a 66-55 win over South County on Jan. 21.

Despite falling 70-63 at Lee last Friday, Lake Braddock buoyed itself with a strong third quarter against West Potomac. After West Potomac’s Martez Redfearn (team-high 14 points) scored the first three points after halftime (24-24), Watson scored eight of the game’s next 11 points to give Lake Braddock a 33-29 lead with three minutes remaining in the third quarter.

Before the game, Morra, a four-year starter, emphasized to some of Lake Braddock’s younger players how important a win over West Potomac would be. In the Patriot District tournament, the top four teams host quarterfinal games and the Bruins still hold high hopes of being one of them.

“Even though [West Potomac] isn’t above us, these are the games we need to win,” Morra said. “We can’t lose to the teams that are below us. That’ll hurt our seeding.”

With its top inside presence sidelined because of injury, Lake Braddock hopes to continue to find second and third scoring options. In addition to Morra, the Bruins will start to rely more on Watson (5.9 ppg, 6.5 rpg) and Sinthorntham (7.3 ppg, 3.5 rpg) inside.

“Losing [Curtis] was tough,” Sinthorntham said. “He was our main defensive presence, but I have to step up. Everyone has to step up.”