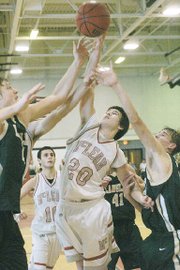 McLean lost to the Saxons for the second time this season. 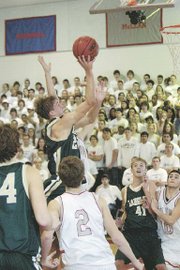 Thomas Kody (22) and the Langley boys defeated McLean for the second time this season.

Every time McLean and Langley high schools meet in boys and girls basketball, they are huge games. Last Friday night, in a girls-boys doubleheader played at Langley, the stakes were particularly big because the local teams, along with playing for pride, were playing for the coveted Rotary Cup trophy.

Earning the hardware Friday were the night’s two winners — the McLean girls, who won their game 32-24, and the Langley boys, who defeated their local rivals, 43-28.

As always, the night's doubleheader opened up with the girls game. Langley got off to the fast start and took a 13-4 lead into the second quarter. However, that would be the end of their offensive success as the Saxons failed to score again until the third quarter.

In the second quarter when the Lady Saxons went scoreless, McLean took advantage and cut Langley’s lead to 13-11 at the half. But that wouldn’t be the end of the McLean run. By the three-minute mark of the third period, the Highlanders had surged to a 20-13 lead that would not be lost.

McLean used its inside presence to dominate, especially late in the game. Langley tried to put together a late run, but McLean held on and defeated the Saxons for the second time this season.

"We didn’t get off to the start that we did last time, so it was a little more challenging, but our defense really kept us in the game," said McLean coach Mike O’Brien, who earlier this season saw his team fall behind early before coming back to beat the Saxons. "It kept us within striking distance and we kept chipping away at their lead in the first half."

Before this loss, Langley had been on fire, winning five of six with a district record of 5-2. However, after this loss, the Highlanders seem to have Langley’s number after having beaten them twice this season.

"We just seemed to get hyped up for these games. It’s a great atmosphere to be in and the kids always come to play hard," Coach O’Brien said.

&lt;b&gt;FOLLOWING THE GIRLS&lt;/b&gt; game, it was time for the boys to take the floor. Since the Rotary Cup trophy became an annual award, the Langley boys have claimed it every year. And the Saxons held possession of the prize on this night.

Unlike the first time these teams met up, when Langley started the game on an 11-2 run on way to a win, neither team jumped out to a quick lead on Friday. It was Langley, though, that slowly crept out to a 9-4 lead at the end of the first quarter. At halftime, the score was just 19-14 and it was obvious that this was going to be another defensive struggle.

After halftime though, Langley woke up with senior guard Derek Baker leading the way. Baker scored 11 of his game-high 16 points in the second half, including three of his four 3-pointers to keep the Saxons out of McLean’s reach. Langley outscored the Highlanders 24-14 in the second half to win 43-28 and finish the sweep of McLean and keep the Rotary Cup.

"This is always a big game for us," Baker said. "It’s always a challenge, but lately we’ve been able to execute really well against them and that’s what it all comes down to."

It was the third straight district win for Langley and improved its district record to 4-4. After losing four district games in a row, this run has gotten the Saxons back in contention for another title.

"Coach [Travis] Hess has always pushed for us to work hard in practice and I think we’ve started to buy into it and that has helped in our success lately," Baker said

While the Highlanders continue to struggle in the district (1-7), the one bright spot of the night was freshman guard Gordon Rogo, who led his team with a season-high seven points. Rogo, who has not scored more than four points a game, got significant playing time and was the primary producer of a stagnant offense.