One of the best kept secrets in Great Falls.

Sunrise at the Mather Gorge, taken in November. As the sun rises from behind a cliff, the warm air hits the cold water to form a low level mist just on the water. 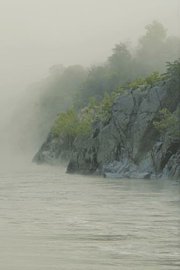 Foggy Cliffs of Mather Gorge, taken in May. The fog-shrouded cliffs seem to be floating on the river.

Kayak pair floating down the Mather Gorge, taken in October. Kayakers talking to one another could be heard as they lazily floated down the Gorge.

Great Blue Heron, taken in September. This bird spent a great deal of time grooming him or herself in the warm morning sun. Every time it would flap its wings, a breeze would carry away a cloud of feathers.

The Potomac River serves as one constant in the life of our Great Falls community that we can be assured will always exist. The farms that once dominated the area are gone, replaced by subdivisions, and several of our well known landmarks such as Buck’s Store and Thelma’s are gone, replaced by progress. But the river remains.

However, one structure exists, surely the largest structure in Great Falls and, to my way of thinking, the most majestic and most beautiful. I would guess that most of the residents of Great Falls have been to the park to see the falls and enjoy the views. But most of our residents have not seen the Mather Gorge and I am constantly amazed by how few have even heard of its name. Since the Gorge is not visible from the three overlooks which were built to view the falls, most people who come for a visit leave without ever knowing that another spectacular scene lies just around the bend in the river.

My most favorite spot in the park is about a 20-25 minute hike to the far end of the Gorge, where there are several high rocky overlooks. I like to get into the park early, before dawn, and set up my camera and tripod on one of these overlooks, where I have an unobstructed view up the entire Gorge.

As I wait for the show to begin, the river may be angry, if we have just had a major rainstorm, or it may be placid, if the water level is down. Regardless, I can always count on it exhibiting some sort of attitude.

The sun starts its long trajectory and offers up lots of colors, silhouettes and shadows in its journey skyward, which is all raw meat for a photographer. Then the wildlife enters the scene, with fish jumping for their breakfast, deer bending down to the river for a drink or great blue herons or cormorants looking for fish. The place is serenely quiet and I can sit on a rock and watch the dawn unfold and take photographs to my heart’s content.

Once in a while Canada geese or ducks will come flying down the Gorge toward me and I can practically hear them before they come into view as the walls of the Gorge channel the sound in my direction. In any season of the year, at any time of the day, this is my favorite spot in Great Falls. It is a place that I can always count on to provide me with a reason to return and I can always be assured that it will be waiting for my return.