Enjoying ‘Majesty of the Falls’
Votes

Enjoying ‘Majesty of the Falls’ 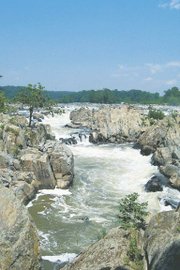 A view from one of the overlooks at the Great Falls Park. 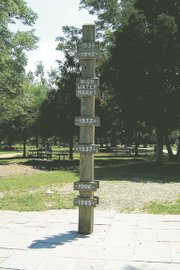 The flood lines of the Potomac River from past years. 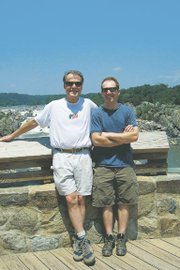 Forrest Horton of McLean and Charlie Clarke from Vail, Colo. enjoy the falls before heading to the wedding of Horton’s daughter, Emily.

Considered by many as "The Niagara of the South," the Great Falls of the Potomac River are situated right in the back yard of the Great Falls community. The park attracts approximately 500,000 visitors per year.

Besides offering a beautiful view and being a tranquil place to spend an afternoon, the falls represent the fall line of the Potomac River. The fall line is a physical border between coastal lands and upland regions. The falls are a result of a 77-foot drop in altitude in a series of cascades.

The park offers 15 miles of easy to moderate hiking, three different overlooks to the falls — two of which are handicap accessible, picnic areas, a snack bar, horseback riding, bicycle trails and the historical canal. George Washington was instrumental in the building of the canal.

Sherry Bellamah of Sterling said she comes to the park at least five times a year. She cited her favorite aspect of the park by pointing to the falls and saying simply, "this."

Although the National Park Service administers the park, Pepco and Fairfax County own the land.

Some local residents work there. Bob Layton of Great Falls has been volunteering as a ranger in the park for the past 15 years. He began to volunteer at the park after his retirement because of the beauty of the park and because volunteering gives him a chance to "give something back."

The park is open to the public all year round, although the summer offers warmer temperatures and sunnier weather. Forrest Horton of McLean said that he visits Great Falls Park every other month and he enjoys seeing the changes throughout the seasons, citing the ice flows from West Virginia in the early spring being of great interest. His favorite part of the park is the "power and majesty of the falls."

Charlie Clarke from Vail, Colo. came to visit the park with Horton. It was his first time at the park. "It would be neat to see the changes over the seasons" for the local residents, said Clarke.

The park’s visitors are a mix of locals and travelers. Admission for vehicles brought into the park is $5 and $3 for each person without a vehicle.