Places To Go for Fun
Votes

Places To Go for Fun

Weekend in McLean: Outdoor concerts, happy hours and much more on offer in McLean. 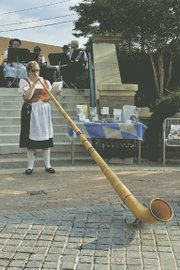 Toby Sissen of The Alte Kameraden (The Old Comrades), the German Band unit of the City of Fairfax Band, plays her horn at the Palladium at McLean on Saturday, June 27.

Part of The Alte Kameraden (The Old Comrades), the German Band unit of the City of Fairfax Band, during their outdoor concert at the Palladium at McLean, on Saturday, June 27.

Some of the audience enjoying the performance by The Alte Kameraden (The Old Comrades), the German Band unit of the City of Fairfax Band, on Saturday, June 27.

Bill Kirchen and his band, rocking out at McLean Central Park on Sunday, June 28.

The scene at McLean Central Park on Sunday, June 28, for Bill Kirchen’s performance. 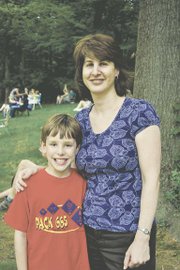 ‘I think just that it’s still more small town," said lifetime McLean resident Julie Kipers, speaking on what’s so great about McLean. She is shown here with her son. "There’s not a lot of franchises. It’s still local restaurants and local hardware. I grew up here and it’s really not that different.’ 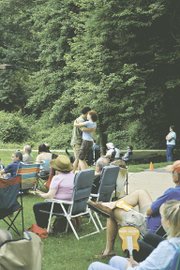 Concert-goers dance in the park to Bill Kirchen’s music on Sunday, June 28.

The hustle and bustle of a typical Saturday at Tysons Corner Shopping Center.

T.G.I. Friday’s is a hotspot for McLean residents to grab a bite to eat while shopping, or take part in their popular happy hour.

A few people enjoy a cocktail before the happy hour rush starts at McKeever’s Pub in McLean.

Whether it’s to hear longtime local favorite Bill Kirchen play, listen to German music or just visit Tysons Corner Shopping Center, people from all over the Northern Virginia area come to McLean every weekend to enjoy the plethora of activities the community has to offer.

During the summer months, a least one outdoor concert to be found in McLean every weekend.

Over the recent weekend of June 26-28, The Alte Kameraden (The Old Comrades) and Bill Kirchen ruled the outdoor music scenes of McLean.

The Old Comrades is the German Band unit of the City of Fairfax Band. They played at the Palladium at McLean on Saturday, June 27.

People of all ages enjoy the Palladium, because of the grassy areas to set up a picnic and all of the space for children to play.

"It’s fun, it’s a little ‘civic’ kind of event," said Coerr. "We appreciate the fact that they try to put on things for everyone to do during the summertime."

The Coerrs enjoyed the concert, while their children danced around to the music.

"My boys just wish the fountain was on during the concert," Coerr said.

In addition to packing a picnic, concert-goers can also grab food and a glass of wine or beer from the StarNut, which is located in the Palladium. The StarNut stays open later on Saturdays for the concerts.

One of Melanie Buscovich’s favorite parts of the summer is the outdoor concerts, so she tries to see as many as possible. Buscovich traveled from Alexandria to enjoy the music at the Palladium.

"The venue is wonderful," said Buscovich. "It’s always clean and cool. You can bring the young children, they dance around and don’t bother anyone, they just dance to the music."

The Palladium is not the only family-friendly outdoor venue in McLean. McLean Central Park also hosts outdoor concerts.

The summer Concert in the Park series welcomes many well-known groups to McLean.

On Sunday, June 28, local favorite Bill Kirchen rocked McLean with a performance. Kirchen is a Grammy-nominated guitarist, singer and songwriter.

"Kirchen is always good," said Doug Olmsted of Alexandria. "It’s so nice to have him back in the area. I’ve followed him for probably close to 20 years."

Adding to the music, the McLean Central Park offers a lot of space for families to spread out and a playground for children to run and play.

"Because it’s outdoors, it’s kind of all ages," said Julie Kipers of McLean. "The kids can play, so I think it’s a lot nicer for parents. The kids can play on the playground and the parents can enjoy the concert."

Kipers, who grew up in McLean and lives here with her family, said that her son’s Cub Scout group made the concert an event for the families and children to get together.

"I like the gazebo to give protection to the band in case the weather goes bad, because they can continue to play on and if it’s good, I’m not going to get out of the rain," said Pierce Bates of Alexandria.

Looking around the park, one sees many familiar faces from the Palladium, as well as new ones. People are sitting on a picnic blanket rocking-out to Kirchen, some are dancing and Frisbees are being thrown. All around this makes for a beautiful Sunday afternoon.

"We’ve been to some events at the Palladium," Kipers said. "All of ‘The Grandsons’ went to McLean High School so a lot of people come out for them because they know them, so they bring in a lot of people. And Bill Kirchen plays here a lot too."

The Grandsons played at McLean Central Park on July 12.

If you are looking for escape from the East Coast heat and humidity, McLean has plenty to offer.

FOR STARTERS, some of the best happy hours in the area are located in McLean.

McKeever’s Pub offers weekday and weekend happy hours, where many locals enjoy kicking back and grabbing a brew.

"McKeever’s is great because it’s always fun and it’s convenient to meet friends here after work for dinner and a drink," said Caroline Brown of McLean.

"The atmosphere is fun and energetic and the food and drinks are good," said Paul Manning of Falls Church.

Another popular McLean happy hour is J. Gilberts, but it is not for those who are allergic, or simply don’t like cigar smoke.

"I love J. Gilberts, right down the street, too," Brown said. "They also have a fantastic menu for dinner and a great martini menu."

If you are in the mood for variety, head right down the road to Tysons Corner Shopping Center, which offers hundreds of stores and dozens of restaurants, including T.G.I. Friday’s popular happy hour.

"I come to Tysons because it has absolutely everything I need," said Gina Ghilardi of McLean. "Whether it’s to go shopping, grab dinner or see a movie, Tysons has it all."

People travel from all over Virginia, D.C. and Maryland to come to Tysons Corner. Those who need retail therapy, need a break from their parents — or children, and those who just want to get their errands done need look no further than Tysons Corner.

"I can either spend 20 minutes here or three hours, it just depends," Ghilardi said.

For those who like to stay inside, but away from shopping malls, 1st Stage Spring Hill is the ticket, literally.

FIRST STAGE is the first professional theater in the Tysons Corner area and offers professional performances and training.

From June 12 to July 13, 1st Stage presented "Shakespeare’s R & J," an adaptation of Romeo and Juliet.

"First Stage puts on a lot of unusual and unexpected shows and things you don’t typically see in a D.C. theater. The play choice here is really unique and unusual," said Alex Smith of McLean.

"Nothing like it exists in this area," said Bettina Wolf of McLean. "I lived in the condos right across the street and I was excited when they opened because I could walk."

Smith and Wolf both said they have attended most of 1st Stage’s productions and have enjoyed the play choices and performances.

"A lot of the actors here are locals, most of them grew up in this area," Smith said. "It’s nice to see kids that you know from various schools are acting here."

Other McLean favorite weekend hotspots include: The Farmer’s Market, every Friday from 8:30 a.m. to 12:30 p.m. at Lewinsville Park; The Old Firehouse Teen Center; The McLean Community Center; McLean Family Restaurant and other treasured places.