Ride of Their Lives
Votes

Ride of Their Lives 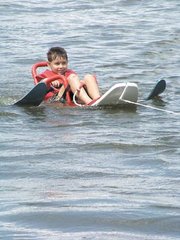 Zachary Least of Springfield was one of more than 40 participants in Extreme Recess, a Dreams for Kids program that took place Saturday, July 18 at Pohick Bay Regional Park. 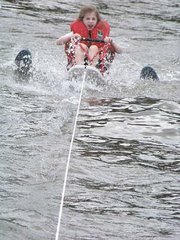 Although her dad insisted she was kidding, Melina Shannon was having nothing of it. ‘It was too fast,’ she said of the waterskiing she did this past Saturday, July 18.

A morning of adaptive horseback riding couldn’t dissuade Lia Winnard from getting what she really wanted this past Saturday, July 18. After her weekly riding class with the Mason Neck Lions Club, Winnard and her mother, Carol Corso, drove a few miles to Pohick Bay Regional Park, where one of Winnard’s goals for the summer was waiting.

After arriving at 9 a.m., Winnard was finally ready around noon before everyone at the Dreams for Kids Extreme Recess program, a Chicago-based 501(c) (3) nonprofit, which provided an adaptive water sports clinic to those with varying degrees of cognitive and physical disabilities, knocked off for lunch. Winnard would have to wait.

Shortly after lunch, though, Winnard jumped into the “sit ski” and off she went, whipping around Pohick Bay with a smile plastered to her face. In addition to horseback riding, Winnard enjoys kayaking and skiing -- “She’s our athlete,” Corso said -- and decided this summer she wanted to try waterskiing.

Winnard had so much fun the first time around that she asked Dreams for Kids national chapter director Andrew Horn if she could go again. If she waited until the end of the day, Horn said, that shouldn’t be a problem. So she did.

“I just had fun doing it and wanted to go again,” Winnard said. “I loved the feel of it.”

Saturday’s event was the organization’s first in the Washington, D.C. area. As Dreams for Kids president Tom Touhy said, it brought together many people from many different backgrounds for an afternoon of excitement.

“This is a great opportunity for organizations that existed separately for years to join forces and create something that never could’ve been created alone,” Touhy said.

&lt;b&gt;ONE OF&lt;/b&gt; the contributing organizations was the Muscular Dystrophy Association, and it wasn’t by choice. After learning that her group’s annual summer trip to Camp Maria in Leonardtown, Md. was cancelled because of a swine flu outbreak, Christine Clemons found the Extreme Recess program online.

Clemons, a health services coordinator who’s originally from Texas, knew that nothing would ever replace Camp Maria, where those participating can enjoy fireside activities, swimming, boating and even a Casino Night. But for one day, Extreme Recess would more than suffice.

“It came perfectly because, with the cancellation of camp, I was running around trying to think what to do,” said Clemons, who works out of the organization’s Reston office. “Not that it would take the place of camp, but I was blown away by the great things that they actually do.”

Springfield native Zachary Keast, 7, wasn’t protesting, although he did joke that the Pohick Bay water was a little on the cold side. Still, Keast enjoyed his waterskiing experience for exactly one thing: the speed.

“I went super-duper fast,” he said.

Dave Shannon, a Mount Vernon resident, learned of the one-day event through a group he belongs to along with Corso called Parents of Autistic Children (POAC). Once plans were finalized, Shannon arranged for his daughter, Melina Shannon, to follow a routine like Winnard’s.

After the early-morning adaptive horseback riding class, Dave and Melina Shannon made the drive to Pohick. Melina Shannon was cautious at first, unsure of the entire experience as she had never been waterskiing before.

Although dad was sure she’d eventually admit to having a good time, the speed that Keast loved so much might’ve been a little too much for Melina.

That, judging by the more than 40 participants that left Pohick after experiencing something that they had never done before, might’ve been the only problem.

“For a lot of these kids, it’s the first chance they’ve had to experience adaptive athletics at this level,” said Horn, the Dreams for Kids director who is also a 2004 South Lakes graduate. “You think about that one moment in sports that you carried with you for years and how important that was for your development as a human and as a kid. Some of these kids hadn’t been able to experience that.”