Weekend in Vienna: From music to recreation, there’s something for everyone.

Stepping into Freeman House is stepping back in time. Located on the main level, the Freeman Store sells Virginia products and games and puzzles reminiscent of the ‘old days.’ Upstairs, an exhibit room, a parlor and dining room look much like they would have more than 100 years ago.

Wolf Trap’s Theatre-in-the-Woods, the children’s performance center, features daily performances, ranging from puppetry and storytelling to hula and opera and kiddie-rock. On Saturdays, the seats are packed with young families.

Megan and Sarah from Miami, visiting their aunt living in Vienna, sample some fresh berries at the Vienna Farmers’ Market on a recent Saturday. 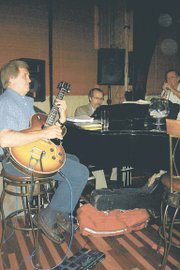 Players come from all over Northern Virginia for Sunday night bingo at the Vienna Volunteer Fire Department station. Recently, a player took home a $17,000 jackpot.

The Vienna Town Green is Vienna’s warm weather venue for outdoor performances, from oompah bands to rock, pop and bluegrass. Special events take place on the Green from May through September.

VIENNA FARMERS’ MARKET - In the early season of the Vienna Farmers’ Market, sponsored by the Optimist Club of Greater Vienna, leafy greens and plantings take center stage. By late June, summer’s bounty is in colorful profusion. The Vienna market, with 25 vendors and a master gardener on-hand, features produce, fresh dairy products, humanely-raised meats, hot foods, cold foods, herbs and lots of breads and sweets. It is as much a social event as a shopping excursion as neighbors run into one another and parents push strollers.

The Vienna Farmers’ Market operates every Saturday starting the first week in May through the end of October. Organic tomatoes sell for $3-$4 a pound, breads between $3 and $5, and eggs — "laid yesterday" — $4.50 a dozen. Even locally-roasted Guatemalan coffee is available for purchase. Lines form for the fruit-filled crepes and the steaming-hot donuts.

Located in the caboose parking lot at the corner of Church Street and Dominion Road, N.E., the Vienna Saturday Farmers' Market is a producer-only market. Farmers and producers may sell only what they grow, raise or make on their own farms or in their own kitchens.

When the market closes down at 12 noon, cross the street to …

FREEMAN HOUSE, administered by Historic Vienna, Inc. HVI operates Freeman Store and Museum under authority of the Town of Vienna. Looking much like it did when built in 1849, Freeman House served as a military hospital for both Union and Confederate wounded and as a stable during the Civil War. Vienna was a "Union" town during that war.

The Freeman Store and Museum has regular store and museum hours Wednesday through Saturday, 12-4 p.m. and Sunday, 1-5 p.m.

On Saturday, July 25, 9 a.m.-4 p.m. Historic Vienna, Inc. sponsors the second Civil War Encampment, on the grounds of Freeman House and the Town Green. More than 20 authentically outfitted re-enactors assume the character of Civil War soldiers and civilians in the encampment. The general encampment is free to the public, offering a glimpse into the lives of the infantry, cavalry, artillery, a general headquarters unit and military hospital. Visitors will find muskets, a cannon and horses that patrol the perimeter. Last year, the first encampment in more than 25 years in Vienna, a temperance leader, representing the "Cold Water Army," took to the camp warning young Civil War recruits to resist the temptation of "strong drink and loose women."

The encampment will also host a children’s camp that runs from 9 a.m. – 2 p.m., and costs $30 for town residents and $37.50 for those who live outside the town. Find out more at: www.historicviennainc.org.

TOWN GREEN CONCERTS AND SPECIAL EVENTS - From spring to early fall, music fills the air at the Vienna Town Green in "downtown" Vienna. The twice-weekly concerts are free, sponsored by local businesses or residents. Performances include bluegrass, rock, German oompah, famed navy and army bands, rock, folk, pop and even an open-mic night. The "Green" fills up with blankets and lawn chairs and contented concert-goers munching on picnic dinners.

This fall, the Town Green will once again be the venue for the second annual OktoberFest hosted by the Vienna-Tysons Regional Chamber of Commerce and the Town of Vienna. To learn more, go to www.viennava.gov/Town_Departments/towngreen.htm.

BINGO at the Fire Station - It’s not your grandmother’s bingo, although Sunday bingo night at the Vienna Volunteer Fire Department [VVFD] appears to be quite popular among grandmothers. Bingo sheets are a quaint and nostalgic reminder, but for the dedicated bingo player, a computerized option is available as well. A number lights up on the digital board and the bingo player, who can buy multiple games, as many as 100 — just types in the number and the computer places it on all bought game e-cards. A caller is on hand and VVFD volunteers staff the games.

A $10 minimum is charged to play bingo, and a $20 buy-in works every game on paper, including the chance on the games that hold the ever-growing weekly pot. The pot grows at $500 increments.

VVFD offers an "early-bird" special, sold until 6 p.m. that throws in extra games. While many players bought traditional card sheets, most bought both computerized and traditional Bingo games.

Only volunteer fire departments in Fairfax County are permitted to offer bingo, but not all do. Vienna is one of three. Players come from McLean and Great Falls and as far away as southern Fairfax County.

The auxiliary sells hot food, desserts and beverages to customers.

Bingo takes place every Sunday in the Flame Room at the Vienna Volunteer Fire Department station at 400 Center Street So. Doors open at 4 p.m.; sales begin at 5 p.m.; and games begin at 7 p.m.

For information on Bingo night, e-mail bingo@vvfd.org or go to www.vvfd.org.

Every spring, some of the nation’s most talented collegiate baseball players converge in Vienna to play for the Vienna Senators, a participant in the Clark Griffith baseball league. This year, about one third of the Senators are from the Vienna-Oakton area, but some have come as far away as Utah to play in Vienna. Many alumni have gone on to play in the pros.

The Senators are not always the "home" team but whenever they play at Waters Field, they usually bring in an enthusiastic crowd. The snack stand is open for hot dogs, drinks and snacks. Check schedule for Vienna Senators games played in Vienna on weekends and on weekdays. To learn more about the Senators and the Clark Griffith league, go to: http://www.viennasenators.com/ or http://www.clarkgriffithbaseball.com/schedule.html.

MAPLEWOOD GRILL - Le Canard went out with a bang on New Year’s Eve, and two months later, transformed into a contemporary cuisine and jazz venue with regular patrons. What started out as a venue for a couple of pianists to play for an appreciative restaurant audience has turned into a jamming-jazz joint. Other musicians come out to play with the pianist and local folks, from Vienna, grab the microphone and belt out Sinatra and Sinatra-style tunes.

Owners Marcel Gunther Kuchtler and his son and head chef, Paul, saved a few of Le Canard’s most popular dishes, such as Wiener schnitzel and classic onion soup, and added some new favorites, from pulled pork sandwiches to grilled steaks.

Some nights after Wolf Trap concerts, Maplewood Grill fills up with theater-goers grabbing a snack and an opportunity to listen to a live pianist. On a recent night, after the Tony Bennett concert, Maplewood was packed with jazz lovers. The restaurant also has a small dance floor. To learn more, call 703-281-0070 or visit www.maplewoodgrill.com.

WOLF TRAP THEATRE-IN-THE-WOODS - One of the most fun parts of going to Wolf Trap’s Theatre-in-the-Woods is getting to the children’s theater. Tucked amid a grove of towering shade trees, the path to the theater goes down a grassy hill, over the creek, and along an earthen trail.

From mid-June through early September, the Theatre-in-the-Woods offers morning performances, two of them, focusing on cultural introductions of music, dance, puppetry and story-telling. From hula dancers to story tellers, "instant" opera, singer/musicians and puppeteers, the Theatre-in-the-Woods brings in families with gradeschoolers and those in baby strollers. The theatre holds up to 1,000 guests, and since children under 3 are free, the box office closes ticket sales at 800. Saturday shows frequently sell out. Wolf Trap recommends pre-purchased seating.

Tickets may be purchased at Tickets.com, by calling 1-877-WOLFTRAP, or at the Filene Center Box Office, or at the new gazebo. Pre-purchased tickets may be picked up at the footbridge leading to the Children's Theatre-in-the-Woods. Day-of-show tickets, if available, may also be purchased at the footbridge with exact change, check, or credit card. A new rustic gazebo, anticipated to be open by mid-July, houses a ticket office.

Adults and children aged three and up require tickets for all performances. Tickets are $8 each for one show or $10 for both shows on the same day.

For general information, call 703-255-1868. For schedule and performance details, go to http://www.wolftrap.org/Education/Childrens_Theatre-in-the-Woods.aspx.

GLYNDON PARK MOVIE NIGHT - Star gaze. One Friday night a month in the summer, the Town of Vienna presents a family film, outdoors, on the grounds of Glyndon Park at Glyndon and Ayrhill Roads. Bring a blanket and popcorn and watch the stars on-screen and in the sky. Free. Learn more at: http://www.viennava.gov/Town_Departments/parks.htm.

The Washington & Old Dominion Regional Park is 45 miles of paved trail for walking, running, bicycling and skating and 32 miles of adjacent gravel trail for horseback riding. The trail runs through Vienna neighborhoods and through the Town. Off Clark Crossing are soccer fields. In the fall, horseback riders mount from the Clark Crossing park area. For more about the W&OD Park, visit http://www.nvrpa.org/parks/wod/index.php.

Meadowlark Botanical Gardens, on Beulah Road outside the Town limits, features more than 95 acres of flowers, shrubs, trees, ponds and parkland. The park includes a visitors’ center and a venue popular for wedding receptions and special events. The gardens are a complex of large ornamental display gardens and native plant collections. Meadowlark has walking trails, lakes, more than 20 varieties of cherry trees, irises, peonies, an extensive shade garden, native wildflowers, gazebos, birds, butterflies, seasonal blooms and foliage. Meadowlark hosts gardening and horticulture workshops. The "cancer garden" offers a collection of plants used in the treatment of cancer. Humans may walk their dogs along the perimeter path only. For more about the park, visit http://www.nvrpa.org/parks/meadowlark/index.php.

WOLF TRAP FILENE CENTER - There’s never a bad time to visit the nation’s only national park for the performing arts, which makes its summer home on verdant hills that once belonged to the Shouse family. Filene Center, with its international line-up, plays host to opera and rock, ethnic musical genres and classics. Dance, such as "Riverdance" and Broadway shows usually run for a week, with matinees included on weekends. Ovations, Wolf Trap’s public dining patio, serves buffet overlooking the park. Nature-lovers can bring a picnic and dine on the lawn. Saturday is usually packed, and, not surprisingly, many of the acts with great mass appeal — Beach Boys, anyone? — are scheduled for the weekend. Festivals, including reggae and blues, are weekend events. For more about Wolf Trap, go to: http://www.wolftrap.org/Filene_Center.aspx.

NVMR hosts open houses, 10 times a year, when the public is welcomed. While admission is free, donations are accepted.

New members, from novice to skilled, interested in model railroading are invited to attend a meeting. Meetings are Tuesdays, from 7-9:30 p.m. The second Tuesday of each month is the club’s business meeting and prospective members are invited to attend. Membership dues are $8 per month with a one-time application fee of $20.

Vienna station, once a stop of the Washington & Old Dominion Railroad, is located alongside the W.&O.D. bike path in the historic Church Street district.

THE VIENNA DOG PARK, on Courthouse Road off Nutley Street, is surrounded by mature shade trees and is mulched. There’s a fountain and some canine play equipment. On Saturday morning, even in winter cold, dogs romp, pet parents mingle. Humans are allowed only if they’re socialized.