When Yorkies Come to Town
Votes

When Yorkies Come to Town 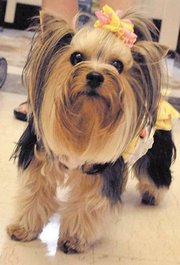 Maggie takes a stroll through the lobby of the Sheraton Suites. 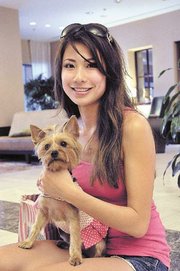 Daisy is accompanied by Lea Moelk. 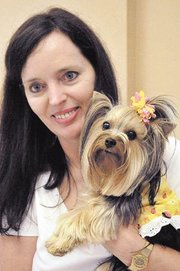 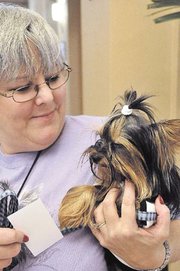 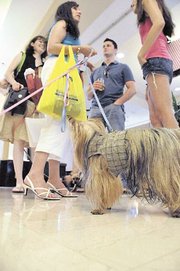 Bubba takes a look around to see who is to be joining him in the park. 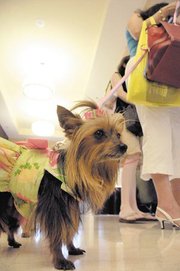 Roxie heads back to the elevators to change her dress for playtime in the park.

It was a friendly atmosphere as online pals finally met up in person, introducing themselves by their screen names, except for the occasional interruptions of yaps, snuffles, and cries of "what are you doing? Come back here!" About 70 humans and more than 100 silky Yorkshire Terriers met at Sheraton Suites Old Town on North St. Asaph Street over the weekend for the International YorkieTalk Meetup.

From Thursday to Sunday, they came from as far away as Arizona and Canada — mostly middle-aged ladies — with their 7-pound Yorkies strapped to their arms, some carrying them in rolling baskets and even Barbie totes.

The weekend’s events began with a Doggie Happy Hour with dog treats and appetizers followed by a Doggie Cruise on Thursday evening. Other highlights were Q&A sessions and the fashion show on Saturday. The catwalk featured female Yorkies in everything from an purple and gold LSU cheerleader’s outfit to lacy gowns complete with accessories from doggie boutiques. "Macho" male Yorkies modeled outfits from green army camouflage, complete with custom dog tags, to more dapper dogs in black and white miniature tuxedos. There was even an owner/dog pair in matching orange and black, tiger print dresses.

The ladies spent their time in seminars on dog training and agility for dogs. Some were excited by the chance to learn more about their favorite breed.

"I thought this would be a great place to learn more about Yorkies," said Margie of Clinton, Md., who has owned her Yorkie, Mimi, for 17 months. Others wanted the chance to meet in person with those they’d connected with so much online. "We’ve been through a lot," says Bo, from Havre de Grace, Md., who came with her "babies" — Hotrod and Maggie Mae — of the members of the YorkieTalk forum. "He went through surgery. Everyone’s been so supportive. I’ve just cried on everyone’s shoulders."

YorkieTalk posts can be about basic dog care questions to general discussions about anything — even non-canine topics like decorating and reality TV. Breeders go onto YorkieTalk to find homes for their litters. Many of the Yorkies at the Meetup were actually related. An important feature of the forum is doing rescues of Yorkies in shelters.

"I posted about a dog on dogfinder in Texas, who was blind in one eye and she was actually adopted by someone on YorkieTalk," said Renata, from Des Moines, Iowa. "I have a lot of posts," she says with a laugh, "probably more than anyone in this room."

This year was YorkieTalk’s second-annual meetup. Participants were very pleased with the location. "I love this area. It’s so nice. Every store is so dog friendly," said Kelli, who came down from Buffalo, NY, with her sister and their two Yorkies.

To join the forum or to learn more, go to www.yorkietalk.com.