An Evening of Highlights
Votes

An Evening of Highlights 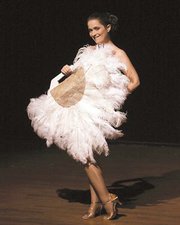 The Little Theatre of Alexandria seems to be following that old adage "lead with your strength" for its new production of the classic musical "Gypsy" based on the early years in the life of Gypsy Rose Lee.

There are plenty of highlights throughout the evening, but the highest of these is the one that starts the night off: Christopher Tomasino leading the on-stage orchestra through one of the all-time great Broadway overtures.

It isn’t often that a community theater’s orchestra does this well with an overture and this particular overture is one of the best. Opening with the trumpet blast on the "I Had A Dream" theme that recurs throughout the play, the orchestra works its way through three of the better known melodies of the full score before wrapping up with a wallop. Tomasino has his forces going full out at the highest energy level they hit all night.

Later, when the story progresses from the decaying world of vaudeville to the decadent world of burlesque, a trio of tawdry strippers teaches the soon-to-be-star Gypsy that what you need in burlesque is not talent, you just "Gotta Have A Gimmick." Ashley Edmiston, Kathy Sanders and Jennifer Strand make this comedy number another memorable highlight.

Then, too, there is the moment in the spotlight for Mickey Daguiso who builds a soft shoe routine into an exciting routine with a big finish as he sings and dances "All I Need Is the Girl" while Sara Jane Lilley follows his every movement as the young girl he doesn’t even know has a crush on him.

Lilley has her own highlight in the first act when, as the neglected younger daughter who is still in the shadow of her sister, she sings to a lamb that has been given to her as a birthday present "Little Lamb, Little Lamb, I wonder how old I am." Later, when she grows up to become a star of burlesque, she works her way through a series of strip-tease (and "tease" is the operative word here) scenes.

The show is one of the most revived of Broadway musicals because name actresses want to sink their teeth into the role of Mama Rose, stage mother extraordinaire. Ethel Merman demonstrated unsuspected dramatic capabilities when she originated the role in 1959. Angela Lansbury, Tyne Daly, Bernadette Peters and, most recently, Patti LuPone have played the role in Broadway revivals.

Here, the show is staged by Joanna Henry who follows a bit of an unorthodox approach to the character of the ultimate stage mother whose ambitions smother her daughters. In terms of design, however, Henry’s production is both well within the traditional approach and quite well done. Ken Crowley’s sets are slide-on/slide-off platforms with the orchestra placed upstage stage behind a transparent scrim. Grant Kevin Lane’s costumes represent what the characters might well be wearing from the early '20s to early '30s with the exception of the intentionally outlandish outfits for the strippers and the vaudeville act.